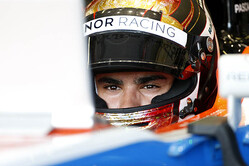 Pascal, not the result you were hoping for from your first Singapore Grand Prix experience.
Pascal Wehrlein: "Well, we've said all weekend this was not our track, but anyway we were P16 and with a Sauber behind me, so it was not so bad. I've loved the whole night race experience and I'm pretty happy."

How did the race pan out for you?
PW: "This was definitely the toughest race of the season. I was pushing hard from start to finish, but particularly from the midpoint of the race to make sure we kept Ericsson behind. Given our performance through the rest of the weekend, it was unexpected that we would have the pace to do that. I was also on the Ultrasoft for 26 laps in the final stint. I had to make that work, and I did, so again, I'm very happy with that."

Esteban, a tough race for you.
Esteban Ocon: "Yes, it was not the best. Pretty difficult, in fact. At the start I managed to avoid the debris that came from the incident involving Hulkenberg, but after that I picked up a penalty for passing under the safety car. I took the penalty at my first stop but that stop became even more problematic when there was an issue fitting the wheel. I lost so much time and it was very frustrating, because there was little I could do but focus on finishing the race. Then there was a second difficult stop and it was tough to be so far down."

A character-building weekend but have you enjoyed your first taste of F1 night racing?
EO: "Yes, Singapore is a very special place and a spectacular Grand Prix, so although I didn't get the opportunity to show our strengths here, I have some good memories and experiences to take away. It's my third race finish now and so I have six races remaining to put that work to good use, which is what we'll do in Malaysia in two weeks' time."

Dave Ryan, Racing Director: "Well, what can I say? It's pretty obvious to everyone that we've struggled with pace this weekend and if we were going to get anything out of this race, it was going to come down to a brave strategy combined with great tyre management. That's exactly how it turned out. Pascal drove another superb race today. He did exactly what was asked of him and I can't stress strongly enough how impressive his performance was to finish ahead of Ericsson, in what has clearly been the quicker car all weekend."

"With Esteban, it was another story. First, there was the safety car incident with the resulting penalty; we need to look at that to understand exactly what happened, as Esteban was certain he was ahead of Nasr moments before the SC boards were out. But that's irrelevant; the stewards thought otherwise hence the 5 second penalty. This had to be served at our next stop, which, quite frankly, was an unmitigated disaster. Thereafter it was a case of getting what we could out of the race, but once again it's been a particularly frustrating weekend for Esteban. Hopefully it will all be different in Malaysia in two weeks' time."