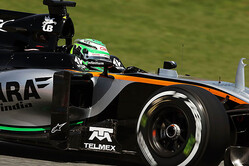 Vijay, the team scored six points in Spain and there were lots of positives from the weekend…
Vijay Mallya, Team Principal: "We certainly took encouragement from our performance in qualifying and the race. It's not easy to introduce a new aerodynamic package during a race weekend, but the team did an excellent job of installing and understanding the new components. We could see the benefits straight away in the data and from the drivers' feedback. Barcelona has never been our strongest track, so to come away with six points means we can feel optimistic for the upcoming races."

What can we expect from the team in Monaco?
VJM: "It's always impossible to make predictions. Anything can happen and that's what makes Monaco such an exciting weekend. Both our drivers are strong there, but the first task is to deliver a clean qualifying lap when it matters: we've seen before that qualifying can become a lottery when the track is busy. All being well we've got the potential to qualify in the top ten and score good points."

Is the team's goal of maintaining fifth place in the championship still realistic?
VJM: "It's still the target and we are only 12 points away from fifth place in the championship. We've not enjoyed an easy start to the season with our fair share of bad luck, but with three quarters of the season to go we have plenty of time to catch the teams ahead of us."

Nico Hulkenberg: "Monaco is one of the best weeks of the year. The track, the location, the schedule - it has all the things that make Formula One such a great sport. This will be my sixth Monaco Grand Prix, but I will still feel a huge buzz when I walk into the paddock on Wednesday morning and see everything taking shape.

"The challenge of the track is good fun and very demanding. You build your speed with each session and by the time you get to qualifying you need to be right at the limit. When you walk the track you can't believe that we actually race there because it's so narrow. You need to be incredibly precise because you can't afford even the smallest mistake. Mentally it's very tough because it's corner after corner and there's never a moment when you can relax - even for a second.

"Monaco is one of my home races and I'm hoping that my luck will start to change this weekend. Sometimes you have a spell of unlucky races and there's nothing you can do about it - that's the way I look back on Russia and Spain. You have to put them out of your mind and move on. Monaco is a fresh start and I'm already smiling at the thought of driving around such a fantastic lap."

Sergio Perez: "Monaco is my favourite circuit of the year. It's very demanding, but it's also a track where the driver can make more of a difference. You need to be brave, push the limits and use every inch of the track - that's why it's so much fun in the car. I really enjoy the quicker parts of the lap - Casino and the Swimming Pool - where you need to be accurate and carry lots of speed.

"When I was a child I always dreamed about racing in Monaco. I've had good memories there and some difficult days too. Scoring points last year was special and a very important result for the team. It's always a busy week on and off the track, but it's good fun because the fans can walk the track and get really close to us. It always gives me a lot of energy just being there and soaking up the atmosphere.

"I'm happy with my results in the last couple of races. We've improved the car and we are moving in a good direction. I think the next run of races will give us the chance to show our speed and continue picking up the points we need for the championship."