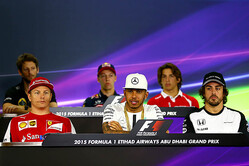 First of all then, a question to you all: how would you sum up your year and what was your favourite moment? Romain, why don't you get us started.
Romain Grosjean: Well, I think the favourite moment is pretty easy - Spa Francorchamps, the podium. To summarise the year: it was a pretty good year I think in terms of driving. We had a good baseline to start the year with the car. We couldn't really update it as much as we wanted but still fighting for sixth in the Constructors' Championship, so pretty pleased with that and yeah, last year with Lotus.

And Daniil?
Daniil Kvyat: Well, a very eventful year I would say, it went by very quickly. I think the start was quite painful but then I think I'm proud of how we managed to climb our way up through all the issues that we had to start with and then I think we kind of stabilised there. Some strong races and some good points, but obviously we are always looking for more in the future. The highlight I think was the podium, even though I wouldn't say it was the best race. We had a couple of really strong races, I would say even the last couple of races I was quite pleased about them. Hoping to finish on high here, yeah.

Kimi?
Kimi Raikkonen: Pretty average, I must say. Better than last year but still far away from what it should be. But there's life and next year we'll try again.

Roberto?
Roberto Merhi: Yeah for sure we started in a very difficult way, with no testing and to be honest I never drove this car before. But I think through the year the thing improved quite a lot - I mean the team and also the car and also me, driving the car. I think the last races were quite good. And obviously the best moment of the year I would say were the last laps in Silverstone with the wet or maybe the qualifying in Spielberg was quite good.

And Fernando, how would you sum up your year and can you pick out a favourite moment?
Fernando Alonso: Well, tough year, obviously difficult and struggling with the pace all year and the reliability, so definitely a difficult season for us. But personally I think it was necessary. It was a step forward in my career after the two championships, after five fantastic seasons fighting for the world championship but arriving second, so I needed some new motivation, some new project that I could trust and I could believe is the only way to become champion again. After one difficult season, as I said, I learn so much. I enjoy working with McLaren, with Honda, with all the Japanese discipline and Japanese culture into the team. I still remain very positive. I'm very, very happy and looking forward to next year being a little bit easier than this one that, as I said, has been difficult in terms of results.

And finally, Lewis, how would you sum up your year. So many favourite moments I'm sure, difficult to pick one?
Lewis Hamilton: Yeah, what can I say? Obviously all different experiences but it has been the best year of my career and I'm in a very fortunate position, a lot of great work done by my team. Probably one of the best races for me was Austin obviously, the pinnacle of the year for me. Yeah, and excited to be here in Abu Dhabi, with the 44th UAE national day and I'm here to try to win that 44th race, which I still haven't done, so it's cool how it all kind of ties in.

Did you see all the 44s around here did you think that was for you, rather for the day?
LH: Well it is my number, it's associated with me, so...

Fernando, you mentioned there it has been a tough season and it's coming to an end here. Your 252nd grand prix start, it puts you fifth on the all-time most experienced drivers list. You talked a bit there about motivation and I just wondered what is your main motivation and goal for 2016.
FA: At the moment there's a question mark, I guess, where McLaren-Honda can be next year. There are a lot of expectations in the team. I think we worked really all season, being united in some difficult moments and always moving forward, so I think for 2016 the main goal for the team is to come back to where we belong, we think, and being competitive, fighting for the top positions. I don't know if that means fighting for the championship, I don't know if that means fighting for victories of just being on the podium sometimes, that's always difficult to know in a very complex sport like Formula One. There are definitely some big challenges ahead in this winter and I see all the things that the team has done in the last couple of months and these seem very logical, very positive and I'm confident that it's going to be a completely different season next year and I'm happy with the progress.

Thank you. Lewis, coming back to you, I know you are very aware of fans on social media and the discussions that take place. There's been a lot of discussion for this final round about whether you and your team-mate Nico Rosberg should be allowed to go for it with whatever strategy you want to use on Sunday in a sort-of end-of-season free-for-all. What are your thoughts on that?
LH: I don't really have any thoughts on it, to be honest. It doesn't really make any difference what my thoughts are. We're going to be racing… the strategists will give us the best… whoever's up ahead will have the best strategy and the guy behind will have the second best strategy, so I don't really have any thoughts on that.

OK. Romain, coming back to you, your 83rd and final grand prix for the Enstone-based team, currently Lotus. You've scored 10 podiums for the team, so in what mood do you say goodbye this weekend?
RG: yeah, it's the first time of my career that I have had to change teams in Formula One, so it's something new. The first time I went to Enstone was September 2005, as one of the driver development and I learned everything from there. So yeah it's going to be… switching off the car on Sunday, jumping out of the E23 and thinking that was the last race with the team is certainly going to be quite hard. On the other hand I really want to push hard all weekend long to score good points, do a good result, thank the guys for all the support, through tough times, better times as well and I think we did both learn from those years, so it was a nice experience. Very much looking forward to the next one as well, it's going to be very exciting with Haas. It'll be good to have a good weekend and say goodbye in a proper way.