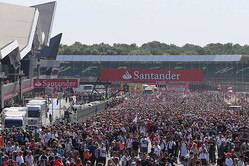 For fans of a certain age, doubts over the future of the race at Silverstone seem to have existed almost as long ago as 1950 when the circuit hosted the first ever race to count towards the Formula One World Championship.

After years of wrangling, during which Bernie Ecclestone gave the race to Donington, a move that was to ultimately prove utterly shambolic, the Northamptonshire circuit agreed a deal with the F1 supremo which would keep F1 at the track until 2016.

Finally, fans could breathe a sigh of relief, the on-off, on-off threat to their beloved race was finally over.

In its desperation, the British Racing Drivers' Club (BRDC), which owns the circuit, listened to Ecclestone's claims that the facility was "third world", "embarrassing" and "like a run-down old house" and carried out a massive development programme.

Whilst some of it has indeed improved the facility, other features, such as 'The Wing' are regarded as a folly, an act of wanton vanity, not called for by Ecclestone, and a waste of money.

At the same time, in its desperation to keep the Grand Prix at Silverstone, in signing the new contract with Ecclestone, the circuit also agreed to an annual escalation of the hosting fee of 5%. Consequently, the current hosting fee is £16m and will continue to increase year on year.

To compound the problem, in a bid to clear its debts Silverstone sold a lease on 280 acres of land at an almost knock-down price thereby losing out on much needed income from rents.

Such is the financial crisis facing Silverstone, unlike most other tracks, is now paying the Grand Prix hosting fee in arrears and as a result its bankers have to agree a letter of credit to guarantee Ecclestone will get his money so the next race can go ahead. Still with us?

The annual boost in ticket sales is barely covering the 5% increase in hosting fees and as a result the bankers are not prepared to issue a letter of credit as they do not believe there will be enough money in Silverstone's account to cover it.

A termination clause in the contract means that in such circumstances the event could be dropped as early as next year.

Such is the financial pressure on the circuit, the cost of tickets for the Grand Prix is among the highest on the calendar and Allen fears, passionate as they are, race fans will not accept another hike in prices.

"If you put the price up you get less people," he says. "It gets more expensive every year and there is a finite capacity that we can get into the circuit. So it is certainly increasingly difficult."

"They are paying next year for this year's race because I have allowed them to do this otherwise they would have closed before," said Ecclestone.

"What you really need for all parties is, in my opinion, somebody who wants to buy a trophy asset and is willing to put a large amount of equity in," says Allen.

"You want somebody that has got lots of money, who loves motor racing, who really wants to run Silverstone profitably but has the capital to inject into the business so it fixes the balance sheet and takes the risk profile away," he adds, leaving sceptics to wonder whether he is actually hinting at Ecclestone himself acting as the circuit's Fairy Godmother.

After all, unlike the majority of recent additions to the calendar, there is no hope of the government stepping in and making up the shortfall.