Raikkonen: This year is the best 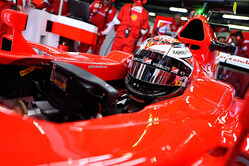 Kimi Raikkonen claims that this year with Ferrari is his best ever in the sport, and he would be happy to stay with the Italian team.

Despite more than his fair share of bad luck this year, the Finn is currently fifth in the standings, albeit 31 points adrift of his teammate, and buddie, Sebastian Vettel.

Asked if being in the same team as the German has affected their relationship, Raikkonen told the official F1 site: "I think we are a good pair. We can talk things over, and that is a lot. We both want to put the team in a position to improve.

"But who can look into the future? Who knows?"... he wryly adds.

Minded that the German has had the better start to the season, Raikkonen admits: "He has done better races. We had some issues in the first three races and obviously made some mistakes in qualifying, but that is part of the game, so no big deal."

Subsequently, speaking at Ferrari's own press conference, the laconic Finn expressed his satisfaction with the team this year.

"In the past when I was here at Ferrari they were good times and it was a good atmosphere," he admitted. "But this year is the best that I have had in any team; how the team works together, how people work together, how the atmosphere is and how things are being run. That tells you a lot. I'm very happy."

Asked if he hopes to remain with the Maranello outfit in 2016, he said: "The team has to decide that. Time will tell what will happen. I'm happy with how things are running."