Nico Rosberg gave a glimpse of what Mercedes is truly capable of this season, without even needing to resort to the softest rubber.

Just over an hour before the end of today's running, Mercedes switched to the soft compound for the first time this year. Shortly afterwards, Rosberg stopped the clock at 1:22.792, 1.203s quicker than the time posted by Williams' Valtteri Bottas earlier, and 0.708 quicker than Felipe Massa's stunner yesterday.

Today's third fastest time, posted by Felipe Nasr in the Sauber, was 1.279s off Rosberg's pace, the Brazilian running super-softs compared to the German's softs.

Whilst the opposition will be wondering what it can possibly to do take the fight to Mercedes, McLaren finally got its pre-season preparations underway, Jenson Button completing 101 laps in the MP4-30. However, shortly after reaching the magic figure, the car ground to a halt between turns 7 and 8, thereby bringing out the second red flag of the day and also reminding the Woking outfit that there is a long way to go.

Following an incident free morning, there were three red flag this afternoon, the first when Daniil Kvyat stopped on track, Button's breakdown and the third when Pastor Maldonado stopped in the pitlane twenty minutes before the end of the session.

Nonetheless, it was a busy day, the nine drivers on duty completing over a thousand laps, only three, Bottas, Kvyat and Hulkenberg, completing less than a hundred.

Whilst McLaren has cause for celebration, so too does Force India. The Silverstone outfit's 2015 contender finally made its track debut just before lunch, Nico Hulkenberg going on to complete 77 laps.

Williams and Toro Rosso both packed up early. The Faenza outfit due to an electrical problem, though insisting that Max Verstappen was happy with his 139 laps, whilst Williams simply called it a day having completed its programme.

With two days of testing remaining, there are bound to be a few surprises however, the sheers pace and reliability of the Mercedes, and Williams, suggests the early stages of the coming season is going to be all about catch-up as far as the opposition is concerned.

Other than sending shivers down the spine of the opposition, Mercedes schedule consisted of aero analysis work in the morning, followed by setup evaluation in the afternoon. Rosberg completed 65 laps before lunch and a further 41 in the afternoon.

"Today was a difficult day to start with but ended on a positive," said the German. "During the early runs, even though the numbers looked like they were in the right place with the setup, it was actually very far away from where it needed to be, which was unusual and caught us off guard a little bit. We didn't really understand why, so a big part of the day has been chasing the setup and finding the right direction.

"It was really difficult to understand where to go," he continued. "I had a lot of oversteer in the car, so the rear was just all over the place with no traction. But eventually, towards the end especially, it was feeling more and more decent. Then, putting the soft tyres on, that gives you the grip anyway so it doesn't really matter what the balance is - more or less it will be possible to do a good lap. I'm pleased with my two laps at the end - I nailed them pretty well and they were both identical, so a good ending to the day.

"We're confident that we have a good car and I'm starting to feel good in it. At the same time, of course, we're well aware that the others have been posting some quick times and we can take nothing for granted. We have a great team who are doing a fantastic job and always want better and better, so we will keep our heads down and keep working.

"It's a work in progress," he warned. 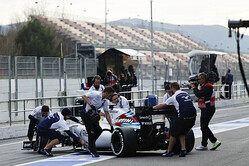 "It was nice to focus on performance today and work to get the lap times lower," said Bottas, who completed 90 laps as he focussed on aero work and race procedure. "We are working hard and still have two days left of the test so there is more still to do. The day was busy and we know there is still more to come, I feel positive and the balance was good. We still need to make sure we look at the longer runs and not just the one lap qualifying pace."

"We started the day doing some aero work comparing data and driver feel," added Rod Nelson, the team's Chief Test & Support Engineer. "We then moved onto a few performance based runs. Later in the day we worked on race procedure including some longer runs and grid simulations. We have had some new components that have performed as expected which has been productive. We have a busy final two days of the test as we optimise the time left until the first race.