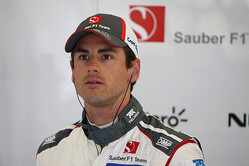 Hours after learning he is effectively out of an F1 drive next season, Adrian Sutil has cast doubt on Sauber's future.

Last night's announcement by the Swiss team that Felipe Nasr will partner Marcus Ericsson, whilst at the same time bringing Banco do Brasil on board as a "partner", seemingly ends Sutil's hopes of a 2015 drive with the Hinwil outfit along with Esteban Gutierrez. Consequently, it also ends deals with several Mexican "partners".

Speaking ahead of this weekend's Brazilian Grand Prix, Sutil, who last year inked a two-year deal with the team was clearly not happy.

Asked if he will still be in F1 next season, the German replied: "At the moment, I don't know, maybe. F1 is unpredictable, but as I said, there are a few things to think about first and then the team has to comment the rest.

"I'm not frustrated, that's just how it is in F1 since many years," he added. "It's a little bit a different business. That's all I can say right now."

However, when pushed on the fact that he appeared to have signed a two-year deal and has therefore been dumped after just one year, and asked whether this is something he needs to talk to the team about, he replied: "Yes, there are certain things to talk about, definitely, yes.

"They've confirmed two drivers but that doesn't mean the drivers can drive and it doesn't mean that the team's going to drive," he cryptically added. "So there's no real change from last weekend to this weekend. It's just an announcement and now, of course, my situation, I think I have to do some talking, to sort out the things."

It's no secret that Sauber is one of the most vocal in terms of the financial crisis facing the smaller teams at present and as it awaits news (and hopefully a hand-out) it appears to be taking its own steps by recruiting drivers who are able to bring fresh partners.

"We've announced our two drivers. I am not aware that next year more than two cars would be used," team boss Monisha Kaltenborn subsequently told reporters. "We've announced our drivers and that's how it's going to be. If there are any other points related to it, these are internal matters which we will discuss internally."

When asked about Sutil's cryptic comment regarding the team's future, she said: "I don't know why he said that. You'll have to ask him that. The views I have on it I will tell him."

Confirming that plans to give Russian youngster Sergey Sirotkin his F1 (race) debut had been dropped, along with Gutierrez' Mexican backing, she defended the signing of Ericsson and Nasr.

"You have to look at the overall situation in Formula One," she insisted. "It's very challenging, and when private teams make decisions they have to take financial aspects into consideration. That's the situation, and it's no different for us."