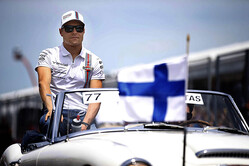 The smile following yesterday's qualifying session seemed genuine enough, and a million miles away from the Principality pout, but one has to wonder what on earth was going through Lewis Hamilton's mind.

'This is his circuit', we were told, even Nico Rosberg said so, but here he was eclipsed by his German teammate for the second successive race weekend and not a hint of chicanery. Indeed, it was the Briton whose lap looked scrappy and desperate. To compound his frustration, it was Hamilton who decided the strategy yesterday as to who went out first.

All of which sets us up nicely for today. Lewis will be keen to show that yesterday was a mere blip whilst Nico will be equally keen to take his second successive victory and thereby maintain his championship lead.

Over the years we have seen various first corner incidents at the Circuit Gilles Villeneuve however, in the wake of some of the 'warnings' made ahead of the Monaco event both drivers would be well advised to take that first series of corners very carefully.

This would be difficult (and boring) at the best of times, but with a rejuvenated Sebastian Vettel on your heels, not to mention a brace of Williams, another Red Bull and Fernando Alonso, the Mercedes boys are going to have plenty on their hands.

Consequently, not for the first time, we remind you, the race cannot be won at the first corner but it can be lost. Indeed, it's worth noting that since 2000 the man starting from ole has only gone on to win the race on five occasions.

Assuming there is no silliness, the race is Mercedes to lose, the 0.6s gap between the Silver Arrows duo and their nearest rival proof that they cannot be beaten on pace. Therefore, it appears to be Nico v Lewis and in terms of yesterday's session the German has the psychological advantage.

Though Hamilton seemed at ease after the session he will obviously be feeling very much fired up today, consequently we can anticipate not only an aggressive drive but some extremely tetchy exchanges with his crew... more so than normal.

After a difficult weekend, Vettel produced the goods when he needed to, especially as this isn't a circuit that suits the RB10. A podium, even the lowest step, would be a great boost for the German today. On the other hand, teammate Ricciardo is very much on the pace also - behind the Mercedes the next four drivers were covered by just 0.266s - so let's not write off Mr Smiley's chances.

The biggest surprise this weekend however, has to be the rejuvenation at Williams, the Grove outfit looking strong since the very first session. A strong result here would not only see the British team leapfrog McLaren in the standings but possibly even snatch fourth from Force India, Rob Smedley doing a superb job of puling the popular team together.

Up until qualifying, one of the guys wearing the biggest smiles in the Montreal paddock was Fernando Alonso, the numerous updates to the F14T, including engine (ahem) reliability, appearing to have paid off. However, the Williams and Red Bulls appear to have the edge over the Ferrari, though Kimi Raikkonen's tardy Q3 performances hardly helped when it came to gauging the situation.

There's a gap behind this lot to Jean-Eric Vergne who will be happy merely to finish the race never point score a point or two, the Frenchman totally let down by the STR9 reliability - or lack of it - this year.

Next up is Jenson Button, a previous winner here, who, failing on the weather gods making an unscheduled appearance, will be happy to leave Montreal with a few more points to his tally.

Starting from 11th and 13th, the Force Indias have to be one of the big disappointments this weekend - though they have competition for that dubious honour. Last year Paul di Resta used tyre strategy to his advantage though one cannot help but feel that Nico Hulkenberg and Sergio Perez are going to need a little something extra.

That said, the Silverstone-based outfit feels that fuel use could be crucial today whilst the increased temperatures also play into its hands.

Another factor today could be brakes. With its long, superfast straights, much like Monza, this circuit is notoriously hard on brakes. Throw in the added concern in terms of the fly-by-wire systems this year and this could be another highly important factor.