Senna and Chandhok sign up for Formula E team 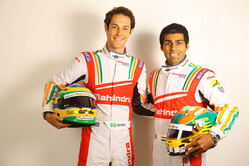 Mahindra Racing has announced that Karun Chandhok and Bruno Senna will join the team for the inaugural season of the FIA Formula E Championship.

The duo will represent Mahindra when they line-up on the grid at the start of the world's first fully-electric racing series in Beijing on September 13. Neither Chandhok nor Senna are strangers to the international racing scene, having both competed in Formula One. Representing the only Indian team in Formula E, Chennai-born Chandhok and Brazilian Senna bring with them a strong working relationship, having already raced as team-mates previously in their careers.

"Both Karun and Bruno come with very strong racing pedigrees and have successfully competed in a variety of racing series over the past few years," said S P Shukla, Chairman of Mahindra Racing. "The entire team looks forward to working with both of them to optimise the performance of our racing car over the next few months of testing before the start of racing in September this year."

"Karun and Bruno both represent the perfect balance between experience and youthful enthusiasm for this truly ground breaking championship," added Mahindra Racing Team Principal Dilbagh Gill. "I am confident they will do their best to represent Mahindra on the world stage and the entire team is aiming for top results from the start of the championship."

"I'm very excited to be a part of the Mahindra Racing line-up," said Chandhok. "The team are showing a lot of commitment to Formula E and it's very encouraging to see the support of senior members of the group to this programme. To be a part of the only Indian team in this series is a real honour for me. It's also going to be a nice reunion for me with Bruno again. He's one of my closest friends from the racing world; we respect each other and work well together which will be good for the development of the team. The city races are going to be a great spectacle and the quality of teams and drivers should ensure some fantastic racing."

"I'm very proud to be joining Mahindra Racing," echoed Senna. "There is a real ambition within the team to be leaders in Formula E from the start. It's also an exciting prospect to be part of such a revolutionary championship from the beginning. There will be a lot to learn very quickly, both for the teams and drivers in terms of technology and driving styles and for race fans as Formula E will popularise a new type of motorsport across the world. Of course, I already have a great relationship with Karun which will help us work together and move the team forward very quickly."

To date, six of the 20 Formula E drivers (two per team) have been confirmed with Lucas di Grassi and Daniel Abt signing for Audi Sport ABT, in addition to Jaime Alguersuari and Sam Bird, who join Virgin Racing.