While he fears that other teams will be keen to court star driver Romain Grosjean, Lotus boss Gerard Lopez hopes the family spirit at Enstone will keep him on board.

Following a torrid start to the season, and the pre-season, Lotus, like the other Renault powered teams, is finally seeing some light at the end of the tunnel.

Five races in and in Spain Romain Grosjean scored his, and his team's, first points of the season. Following the disaster that was 2012, when many believed the Frenchman should be banned from F1, if only on a temporary basis, for his aggression and recklessness, the youngster was one of the true stars of 2013.

Again, this year he has given a good account of himself, especially considering the equipment at his disposal and the financial problems his team faces, Grosjean has been a revelation, and nobody begrudged him the handful of points he took away from the Circuit de Catalunya.

Speaking to the Press Association, Lopez admits he had a hard time fighting off the attentions of suitors last year, whilst admitting that he expects them to come a calling again this year.

"We don't have the budget of some of the other teams, so there is a point up until which we will fight," he says. "But Romain is really happy here, he is part of the family, and I don't think he is planning on going anywhere.

"His drives last year meant there were a couple of teams knocking on the door to find out what he was doing, and now we've the same this year. I'm not saying Romain is going, but what I am saying is that here is a driver who was criticised, and now suddenly people are saying he is a driver who could pretty much drive for any team." 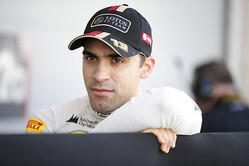 On the other hand, the same cannot be said of teammate Pastor Maldonado, who has done little to help his reputation. In Spain, at a time the Enstone team was clearly getting its act together, the hot-headed Venezuelan crashed in Q1, thereby robbing the team of what might have been a double-points finish.

"It's a case of working with him to make sure he is comfortable," said Lopez. "He had an easy weekend until qualifying, and he would easily have been in Q3. When I say 'easy', he pushed but didn't really have to push until he probably decided he had to push more in qualifying when it probably wasn't required.

"He's a driver who needs to understand that in certain circumstances, with his speed, then 95, 96, 97 per cent should get him to where he wants to be, and then once in Q3 give it 100, 105," he added. "We've lived partially the same thing with Romain, and people wrote him off, but now, as I say, we've people knocking on our door to see if he can be in their team.

"We will take a long-term view on things, so we're not particularly worried. We'll get the best out of Pastor," he added. "We think we can do the same with him, as we did with Romain, to ensure he is at his best every race weekend, and consistently throughout the weekend. I have a lot of faith in him."

No doubt the PDVSA millions help to ease the pain.