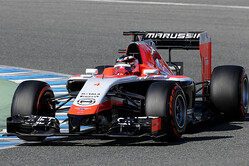 The Marussia F1 Team's Jules Bianchi and Max Chilton drove an excellent race in today's Formula 1 Gran Premio de Espana Pirelli 2014, confirming the improvements to the MR03 package introduced for the start of the European season.

The pair ended the 66 lap race in 18th and 19th places respectively, displacing the single remaining Caterham car along the way and matching the Sauber team - and in the latter stages of the race, Force India - for pace.

The Marussia F1 Team continues to hold 10th place in the Constructors' Championship and Max Chilton's record remains intact, having seen the chequered flag on 24 occasions in 24 races.

Jules Bianchi: "It was a good race today in which we saw clear signs of our improvement. I was able to get ahead of my team-mate at the start, which was my first objective, and to stay ahead of the Caterhams which was the next. Our other objective was to take the fight to Sauber and while we were able to match their pace, the gap to them ahead was too great to be able to take a position from them. That time will come, I'm sure and maybe a race like Monaco will give us a better opportunity. I am happy for the Team that there is some reward for all the hard work, now we have to keep pushing and keep up the momentum."

Max Chilton: "I'm really pleased that we've seen a good step forward here and we've been able to lift our performance versus the cars around us. We've definitely gained a really strong advantage on the Caterhams and the Saubers are now in our sights, so well done to the Team. On a personal note it's also great to keep my finishing record alive and that's 24 out of 24 now. I'm really excited for Monaco now. It's a race I did well at last year and one that always presents a few opportunities. With the improvements we have we could have an interesting race."

John Booth, Team Principal: "Overall a good race for the Team today and one where it's great to be back looking forward to our next set of competitors, as opposed to the cars behind. We planned for a two-stop strategy and after a good start by both cars Jules was away working to build the gap to the cars behind. Unfortunately Max got stuck behind Kobayashi in the first stint and in order to try to leapfrog him, we decided to try a three-stop race with Max. In the end, Jules' two-stop strategy worked pretty much as planned and his pace at the end of the race on the prime tyre was very good. It is clear however that we need a few more tenths for us to stay with the back of the midfield pack. The three stop approach for Max was not as effective as the two-stop but it did achieve the objective in respect of Kobayashi. Unfortunately he ended up behind Ericsson on one of his middle stints, which ultimately meant that the gap to Jules at the end of the race was bigger than it should have been. We move on from this race to the test this week. Through most of the weekend we have been identifying areas where we can see room for improvement and we are pleased that the test will provide us with the opportunity for both drivers to explore these set-ups and hopefully pull a few more tenths out of this package. This will make a huge difference going forwards."

Claudio Albertini, Head of Customer Teams Power Unit Operations, Scuderia Ferrari: "The start of the European season coincided with a particularly challenging race weekend, especially in terms of reliability. Therefore, the outcome of the Spanish Grand Prix has to be welcomed, considering that both Jules and Max once again saw the chequered flag. In terms of performance, there was a step forward, evidenced by the difference in performance compared to our main opponents, but it is clear that there is much work to be done and, on this front, we know that the contribution we can make is very significant. Each kilometre is important to gain experience for the development of the power unit and, in this sense, the two days of testing that will take place at this track next week will be a big help. Our goal is to put the team in a position to be competitive against those teams ahead, albeit everyone is developing at the same time."