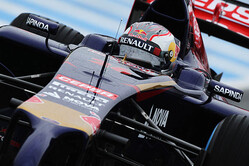 Daniil Kvyat: "To be honest it was quite a difficult race today. We lacked pace, even though I must say that the first stint was quite positive and it seemed possible to even fight for some points. In the end, tyre wear was quite heavy and together with the lack of pace, it turned out to be a tough race. The opening lap was okay and there were lots of battles, in which I managed to overtake a few cars on the outside line and by the end of the first stint I even managed to close in on both Force India cars. But unfortunately it was not enough and even when I put on a fresh set of option tyres for the last stint and overtake a couple of cars towards the end of the race, it was not possible to make it into the points today."

Jean-Eric Vergne: "Somebody has asked me if I feel a bit persecuted by bad luck at the moment. It might look like this, but this is part of the game. I always do all I can, my team is working really hard and problems can happen. For the ten grid positions penalty I don't blame anyone. When I crash the car it's the team that pays my mistake, so this is part of racing. Today I was really determined in having a good race, against all odds. The first stint was quite difficult as I had a front left brake problem which caused front locking, but the pace was really looking strong on the option tyres, until an exhaust problem put an end to my race. I'm still very positive that I will have my chance. I drive a Formula One car and I enjoy doing it, no matter what! This race weekend is now behind my back, we have the test session here next week and Monaco is just around the corner. My team and I will once again put all our efforts together to have a good weekend there."

Franz Tost (Team Principal): "We struggled during the whole weekend here in Barcelona, without being able to achieve the pace that we were expecting. In both qualifying and the race we couldn't build up the speed to go into Q3 and to finish in the points today with Daniil. As for Jean-Eric, unfortunately we had to call him in soon after his first pit stop because of a problem to the exhaust system. Now we will work very hard to prepare the car for a better performance in Monaco."

Ricardo Penteado (Renault Sport F1 track support leader): "It was a hard race all round as Daniil struggled to get the pace from the car, while JEV started with a known issue with his exhaust. We hoped to get to the end but the team decided to retire when the numbers showed it would not be safe to do so. Although the overall result is disappointing we have made progress in energy and fuel management with the new software improvements and the next round will come very shortly in Monaco."