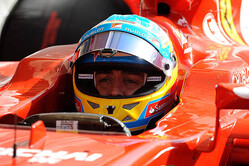 Fernando Alonso: "I think fifth is a good result in such a difficult qualifying session, especially as it's the first time we've run in the wet with the new car and because from this position, a podium finish is possible, which is worth a lot of points. We were lucky in Q1, when the rain came just after I'd done my quick lap and in Q2 we were also able to run when the track was at its best. I knew that the results of free practice did not reflect the reality of the situation and that the hierarchy would only become clear today, with Mercedes a step ahead of the rest. It would also give a clearer picture than the one we had from testing, when we couldn't be sure what the other teams were testing. Now we have seen in which areas we need to improve and the aim is to do so in the next few races. I don't think the consumption factor will change things too much, because when saving fuel, all the cars lose half a second. On top of that, the weather will come into play tomorrow as the forecast isn't clear. The priority is to finish the race and to do better than the others in the coming months. I am sure that with practice, we will learn how to get the most out of the car and simplify all the procedures."

Kimi Raikkonen: "Qualifying wasn't straightforward today, especially because of traffic. When I was on a quick lap, I had a car in front of me at every corner. That stopped me getting a clean lap and at the end of Q2, I spun off damaging the front wing. I don't think I'd have gone quicker anyway, as I had already reduced my speed at this point, because I knew already I wouldn't make it to Q3. It's a shame, because compared to yesterday we have made some steps forward. In the wet we were quick and I had more feeling for the car. We know we have a lot of work to do in every area, especially on car set-up, but at the same time, we are sure we are going in the right direction. Tomorrow's race will be tough, the weather forecast is unclear and on top of that, with the new rules, it's hard to predict how things will go. But it's only the first race of the year and we will do our best to get a good result."

Pat Fry: "Qualifying in the wet in Melbourne is nothing new, but today, added to the wet track, the drivers also had to deal with all the new technologies introduced in the regulations. We are not satisfied with the final result, even if the F14 T is still at the development stage and I believe the team is working in the right direction to make up ground to our rivals, especially Mercedes, who today confirmed the form they'd shown in winter testing. Our grid positions would suggest an uphill battle in the race, especially for Kimi and we can expect unknown factors linked to reliability and fuel consumption to count for a lot. As for the former factor, we are paying close attention to every little detail. At this point, we cannot allow ourselves to be distracted, because with such complicated systems, the unpredictable could come into play. In terms of race pace, we've seen some teams are faster than us, but I think the first race of the year could throw up some surprises, hopefully in our favour."