I think it's fair to say that 2013 was rather a lacklustre year for the Woking based team who's 2012 campaign was bookended by great results. A slump in the middle of 2012 just when the team were focusing their attention on the MP4-28 led the team to think aggressively in order to chase performance. This was compounded by the team's mistakes around Pirelli's 2013 offerings thought to emanate from the scale model tyres given to the teams to work with. 2014 will be seen as an interim year for McLaren with it being the last year in a 19 year partnership with Mercedes as engine suppliers, as Honda becomes the power unit of choice once more in 2015.

I think it's fair to say that the MP4-29 Front Wing shown here will be a placeholder as genetically it's almost identical to the one used by the team at the tail end of 2013. The only real difference comes in the form of a new Endplate which see's the front section of the element forming a partnership with the rear portion having a slot, allowing airflow to move from either side. The 75mm reduction in wing span either side requires the team to think about the airflow around this region in a different way to it's
predecessor.

The nose of the 2014 cars as we know has come in for intense criticism and McLaren have clearly opted for the 'finger' nose route. This option although ungainly meets with the minimum height regulation (185mm from the reference plane) [1] and covers the 9000mm2 at 50mm behind the tip section of the rules whilst McLaren's signature arc'd connection pylons remain [2], maximising the amount of airflow space that can pass under the nose/chassis.

Forming part of the nose, McLaren have employed forward turning vanes that droop midway below the nose, helping to turn the airflow (early at the Floor and Sidepods) [3] these will help not only manage tyre wake emitted by the front wheels (especially in yaw) but also help to control the Y250 Vortex.

Last season McLaren decided to be aggressive with their challenger, one of their decisions was to use pull rod suspension at the front of the car as had Ferrari in 2012. Many people blamed the suspension choice as a factor in their poor form but I'd still argue otherwise. However with so many other complicated issues to surmount for 2014 the team have decided to switch back to push rod front suspension for this season. 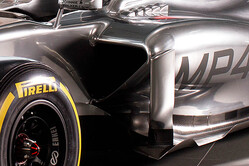 Another season, another new Sidepod inlet design with the team utilising a triangular configuration on the MP4-29. This allows for a deep undercut enabling good clean flow around the Sidepod to the rear of the car. Whilst the physical shown the MTC has the bulk of the car shown there are elements that are visible in the Sam Michael video and the 3D rotating vehicle on McLaren's website that are missing. 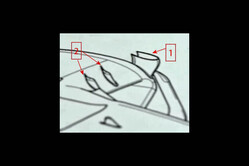 The Airflow Conditioners on the edge of the floor are consistent in all three variants however what is missing from the physical vehicle are twin Vortex Generators [2] atop of the Sidepod and an interesting expanded Horseshoe Vortex Generator that lies on the Sidepod's shoulder [1] and is likely a Chimney that will dissipate airflow from the internal flow of the Sidepod (Something that we saw used pre 2009). I look forward to seeing the car in motion to ascertain which of these components make it to Melbourne as McLaren did the same last season too. 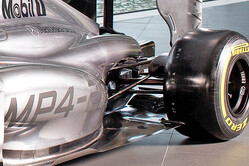 The rear of the Sidepod has been treated to an extreme makeover affording maximum floor space and enabling airflow the room to manoeuvre. In front of the rear tyre and on the floors periphery we see that the team have added tyre squirt slots.

With the crank position raised on the 2014 powerunits it seems McLaren have taken the opportunity to raise the crash structure up off the floor too allowing airflow more free reign. Above this we can see that the team have decided to vent the used, warm air from the Sidepods alongside the centralised exhaust exit.
There had been talk before the cars launch that the team had been working on a revolutionary rear suspension system. It seems that this was no more than a stacking of the suspension elements in order to simulate the Beam Wing now ruled out by the regulations. Having adopted the halfshaft encapsulated in the lower wishbone arrangement last season the team have returned to it being exposed.