So good they postponed it twice 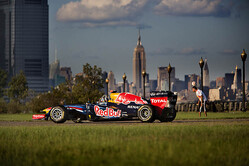 It's not the wording of the press release from Grand Prix of America regarding the postponement of the 2014 event that frustrates but the timing.

Of course, having confidently predicted for some time that the race will not take place - certainly not as we know it - it came as no surprise when the FIA's official schedule for 2014 arrived confirming that along with Korea and Mexico, there would be no F1 on the streets of New Jersey next year.

However, just minutes later, with predictable arrogance, the statement from GPA followed, declaring that "promoter Leo Hindery Jr, and his team are working on restructured financial arrangements for a 2015 race".

It was pure deja vu; on 28 September 2012 GPA proudly announced that the event at Port Imperial was on the FIA's provisional calendar for 2013. Less than a month later GPA announced that "the inaugural race has been moved from June 2013 to 2014 due to ongoing construction issues".

Low and behold, on 27 September 2013, the FIA's provisional calendar for 2014 had New Jersey on the calendar, the event scheduled for 1 June to form part of a three weekend back-to-back schedule with Monaco and Canada.

"The race will be the first Formula One race in the New Jersey/New York area," boasted GPA, "a fitting celebration of the world championship's 65th year of competition.

"The entire Grand Prix of America team is thrilled to join the 2014 FIA calendar and we look forward to bringing world-class Formula One racing to New Jersey," said Hindery.

Then came yesterday's announcement, this time Hindery citing money problems as he revealed that he and his team are "working on restructured financial arrangements".

"Our entire management team and our supporters in New Jersey, New York and throughout the Formula One community obviously want to see the inaugural Grand Prix of America at Port Imperial take place as soon as possible," he added. "Bringing a world-class race to the world's largest media market is a huge undertaking that has required balancing construction of our road course, without tapping any public money, with the Sport's own timing demands.

"I want to thank Formula One Management, New Jersey Governor Chris Christie, Mayors Richard Turner and Felix Roque, Roseland Property Company and the other local property owners involved for their patience while we've worked to get this right so that we can finally go racing in 2015."

No thanks to those fans who have shown equal patience as the race gets 'postponed' yet again, but there you go.

As we have said previously, getting on to the provisional calendar is the easy bit, all you need is a couple of hundred thousand dollars to pay the fee... it is finding the hundred million plus to stage the event and pay FOM's fees that is the real problem.

The apologists remain convinced that the event will eventually happen, not least because it is Bernie Ecclestone's dream to have a race with the world's most exciting city as its backdrop.

For those new to the sport, might we suggest that neither Bernie nor his partners - you know, the people that actually own the sport - have little room for sentimentality. Much as they might want to see New York on the calendar it won't happen until the money is securely in the bank.

We have already gone into great detail in terms of the practical and physical aspects that stand in the way of the proposed circuit and we have seen and heard absolutely nothing to convince us otherwise. Indeed, looking ahead to 2014 we believe that the current ambitious construction programme in the area will lead to even more (physical) obstacles in the way.

However, as for the money, what does Hindery have that would possibly convince anyone to invest, after all, as we previously revealed, such is his utter confidence in the race he is willing to give up his own stake in the project should the right partner be brought on board. Yeh right.