The truth about F1's prize money 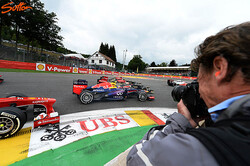 At Pitpass we would never say we are jacks of all trades. Formula One is one of the world's most diverse sports and frequently touches on subjects of politics, technology, engineering, business and more. We have a team of respected, talented specialists who provide readers with analysis on these areas including our technical editor Matt Somerfield, former Motor Sport editor and renowned motorsport historian Mike Lawrence and Christian Sylt, the only reporter worldwide who regularly covers the business of F1 for national media. Readers get that seal of quality by coming here rather than to outlets which try their hand at subjects which they don't specialise in. A case in point is the follow-up coverage of our recent report that the prize money received by F1's teams accelerated 8% to a record £462.4m last year.

This news was contained in the 2012 accounts for Luxembourg-based Delta 2, the highest-level F1 parent company filing publicly available financial statements. The news about the accounts was reported by Sylt in the Daily Telegraph and American motoring magazine Autoweek as well as being presented in detail here on Pitpass. It is a credible line-up and the news warranted it. Nevertheless, it attracted the attention of some observers who lack experience at reading F1 company documents and consequently run the risk of making significant slip-ups which mislead readers.

One report argues that F1's governing body the FIA should get more from the sport than its annual fees which the writer estimates at $39m. That's perhaps a valid point but unfortunately any potency it might have is lost by the writer making an astonishing gaffe which puts a question mark over his research and muddies the waters when it comes to the finances of F1.

The report claims that "the numbers being used involve only one of the Formula One companies: Delta 2. They fail to include the proceeds that are generated by other arms of the business." It adds that "Beta, Gamma, Epsilon and Omega divisions include the revenues from Allsport Management, GP2 and GP3. Allsport Management looks after F1's trackside signage, VIP hospitality and official supplier programmes and so there are significant revenues from these which the team do not get a share from. In overall terms this means that they do not get more than 50 percent of the money generated by the sport." This is far from the truth.

It is true that Delta 2 does not receive income from GP2 and GP3 as well as F1's trackside signage, VIP hospitality and official supplier programmes. Our original report made this point quite clear as it stated that "the companies responsible for F1's two other main business areas of trackside advertising and corporate hospitality are based in Jersey so do not file publicly available accounts." However, simply because Delta 2 does not receive those revenue streams that does not mean to say it does not pay out prize money which is equivalent to a percentage of their profits. In fact, this is exactly what it does.

Anyone with a good working knowledge of F1's business history will remember that back at the Spanish Grand Prix in 2006 a Memorandum Of Understanding (MOU) was signed by Renault, BMW, Mercedes, Honda and Toyota . This put the brakes on the manufacturers' threats of setting up a rival series which was initially known as the Grand Prix World Championship.

One of the key terms in the MOU was that the teams' prize money would increase substantially from the amount they were getting which was only comprised of 47% of the broadcast fees paid by television stations. It increased to give the top 10 teams a 47.5% share of F1's profits from all areas of the sport. The profits from which the teams' share is calculated are known as Prize Fund earnings before interest, tax, depreciation and amortisation (EBITDA). The first full year that the teams were paid this increased share was 2011 and the deal still stands today along with bonus payments for Ferrari, McLaren and Red Bull Racing. Giving the teams a share of all profits from F1 effectively doubled the teams' take and it explains why they dropped their threat to quit F1.

In case there are any sceptics out there, here is page 85 (pdf) of the flotation prospectus for F1 which is of course a legally binding document.

It states that "in 2011, Team Payments totalled US$698.5 million, as compared to US$659.1 million in 2010, representing an increase of US$39.4 million, or 6.0% which was driven primarily by higher Prize Fund EBITDA and the inclusion of the operating profit of our advertising and sponsorship and hospitality businesses in Prize Fund EBITDA for all of 2011 as opposed to only for the period from April to December in 2010."

That takes care of the first flaw in the piece but what about the allegation that the teams "do not get more than 50 percent of the money generated by the sport"? Unfortunately, that's inaccurate too. Page 85 of the prospectus clears this up too and, yet again, it is because the teams do indeed share in the revenues from trackside signage, VIP hospitality etc.

The prospectus states that "Team Payments were 48.1% of our Pre Team Share EBITDA in 2009, rising to 59.5% and 59.6% in 2010 and 2011, respectively, as the operating profit of the advertising and sponsorship and hospitality businesses was included in Prize Fund EBITDA and therefore increased the Prize Fund, and payments were made to the new entrant teams." It adds that "under the Team Agreements [the contracts signed in 2012 which commit the top 10 teams to race in F1] and the New Concorde Agreement when entered into, total Team Payments (excluding amortisation charge for the signing fees) are expected to be approximately 63% of Pre Team Share EBITDA."

The one thing which the observer did get right is that the F1 teams are missing out on income from GP2 and GP3. This is confirmed on page 85 of the prospectus which states that "Prize Fund EBITDA is our operating profit after the application of certain adjustments, where relevant in any year, including the exclusion of the operating profit for the businesses which undertake the GP2 and GP3 businesses"

According to the flotation prospectus, revenue from GP2 and GP3 came to $44.8m in 2011 which was 2.9% of the total. It is no great shakes and, to be frank, anyone who thinks that GP2 and GP3 teams should fund F1 teams really does need their head testing.