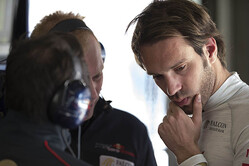 After a season punctuated by misfortune Jean-Eric Vergne is hoping the worst is now behind him. In Italy his race ended in transmission failure, the fourth time he's been forced to park his car early with mechanical problems this season.

"I've had a lot this year and I could not imagine I could have that much bad luck in one year," the Frenchman told reporters on Thursday. "Hopefully it's over at least for the rest of the year, but I shouldn't even say that because I said it a couple of races ago!"

His Toro Rosso team has been on the rise in recent races, the Italian squad appearing to have benefitted from revisions to Pirelli's tyres. Daniel Ricciardo was seventh in Monza following on from tenth in Belgium, with eighth at Silverstone it made it three points scoring finishes in five races.

Singapore however is a different challenge and opinions over the team's fortunes are mixed.

"I expect the car first of all improved a lot since Monaco and as we were quite good in Monaco we can expect to have a good weekend here," said Vergne.

"I would say that it has paid off. Even last year it was my first time and I don't think I did too badly, until I crashed with Michael, and this year Monaco was not too bad either."

"I love all the street circuits," added Ricciardo. "I haven't had great results on them this year but I do thoroughly enjoy them. We salvaged some points here last year and I definitely believe we have a stronger package this year.

"Obviously the mentality is not to get beat before the weekend starts but we don't expect it to be our strongest circuit," he continued. "At the same time coming into China this year that was probably our worst circuit last year and we had one of our best results there. So I think we'll just see what happens once we get on track. I won't predict too much.

"I'll be pushing and probably kissing a few walls along the way, but hopefully not too hard!"