The 4.35 mile (7km) Spa-Francorchamps circuit, set in the Ardennes Forest, is a throw-back to Formula One's past, sanitized over the years with both safety measures introduced to the circuit’s layout and the ongoing development of the Formula One machines meaning the once ferocious circuit is now slightly tamed.

Laying in wait for the grid's 22 drivers remain some of the most challenging corners on the calendar, none more so than the famed Eau Rouge/Raidillon combination that sees the drivers climb the 35 metre hill whilst piff-paffing left, right and then left again with the last being blind as the car crests the summit.

This combination of corners is a test not only for the driver's skill but his body as well, with compression being a factor as the car climbs and turns. The now flat-out combination of corners also puts strain on the tyres and engines alike with around 1000kgs of load placed on the tyres (data from Pirelli) at its peak whilst the steep change in altitude puts pressure on the engine to keep producing power.

The rest of the lap however is no picnic and requires compromise to be made with the setup of the car. Split into three sectors, one and three are much lower downforce than two with the complexity of the second sector ideally requiring much more downforce. Other factors that must be considered are adverse camber angles and bumpy braking zones (especially the most severe braking zone at the end of the lap into the former bus stop chicane) which challenge the drivers throughout the lap.

The team is often criticized as it appears from the outside to not be flexible in its approach to aerodynamic configuration, always taking the highest downforce available. During Friday's free practice sessions however it became clear that the team was relinquishing some downforce for straight-line speed with the drivers testing lower downforce rear wings.

The image on the left (click to enlarge) shows an extremely shallow angle of attack being used and whilst this wing didn't differ significantly to the one used by the team during qualifying and the race it was really being tested for the last European race of the season at Monza. 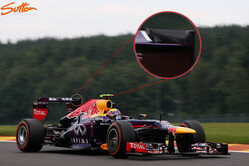 As we can see in the magnified section of this image (right) this extremely low downforce wing doesn't feature the louvres we normally see in the endplates. The louvres are placed in a normal configuration rear wing's endplates in order to bleed some of the low pressure into the high pressure region. This is done to reduce the formation of wing tip vortices that are generated as the wing becomes loaded. These vortices are harmful to the flow structure of the wing as without the louvres the vortices would spool up either side of the wing making the outer portion of the wing less effective. The louvres don't eradicate the vortices completely but straighten them for much longer reducing the drag induced.

The image (left) shows the rear wing actually employed by Red Bull for qualifying and the race which in itself still has a shallow angle of attack (AoA) and does have 3 louvres in the endplate maximising efficiency for the additional AoA.

We can also note from this image that the mainplane has 4 angles at which it can be set and the team had opted for the shallowest when the image was taken. Also noteworthy are the ‘V grooves' we see in the trailing edge of the top flap, Red Bull usually opt for a large V groove in the centre of the flap but on this wing it's a much smaller V. This is another method of reducing drag when running higher AoA's and so with the shallower angle the team plays one compromise off another.

Lowering the downforce of the car must be balanced and so at the front of the car the team has once again opted to change the nose design, placing the FOM cameras in a more neutral position than their usual hammerhead configuration. To cause less airflow constriction the team has also deleted the small under nose 'Pelican' bulge its other nose utilises.