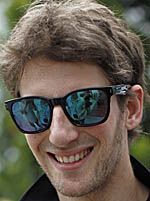 Romain Grosjean will take third place on the grid with Kimi Räikkönen lining up sixth for tomorrow's Hungarian Grand Prix, after a hot qualifying session at the Hungaroring.

Both drivers are one place behind where they qualified here in 2012 which resulted for a 2-3 finish for the team; Kimi coming home just ahead of Romain on that occasion.

Kimi Raikkonen: "It hasn't been the easiest weekend for me so far. Maybe the new tyres are a bit different – especially on the front – so it's been hard to find a good setup. We're getting there little by little and the car was definitely better in qualifying than at any other point this weekend. Obviously P6 is not ideal, but it's better than we have seen sometimes so we'll try and see what we can do tomorrow. It's not so easy to overtake here, but we have seen in past years that if you can run with the tyres well you can make a lot of places, so let's see what we can do."

Romain Grosjean: "It's been a good weekend so far with the car consistently showing strong pace. Setting the fastest time in practice this morning was a good sign, and the car was handling really well throughout each qualifying session. Lewis set a very quick time, but we're not too far from Sebastian [Vettel] and anything could happen in the race depending on the tyres. I think tomorrow will be very open and a lot will depend on strategy, traffic and things like that, so if we can put everything together there's the strong possibility for a good result."

How was qualifying for the team?
Alan Permane, Trackside Operations Director: We're reasonably happy but – of course – we always want more. Everything went pretty much as we expected. For Romain, his single lap and long run pace has been strong and Kimi is much more on top of his car than yesterday. From third and sixth there's no reason why we can't have a strong race with both drivers.

Who do we see as the main rivals for a good result?
AP: We see Sebastian Vettel as our main challenger in the race. The Mercedes did go well in Monaco on a tight and twisty circuit – in the race as well as in qualifying – but here tyre degradation should be more of a factor. This should help us in our fight for a good result.

We saw some sideways moments from Kimi in the last corner; any concerns?
AP: It happened a couple of times and certainly makes for nice slow motion television. He has complained of the rear sliding which has been something we've focused on eliminating through setup tweaks.

Romain just missed out on P2; how much of a difference is it here between being on the front or second row?
AP: Third is actually almost as good as second here as you start on the clean side of the grid and it's a very dusty circuit. Lewis [Hamilton] and Sebastian were just too strong for us in qualifying, but there's potential for us to have a very good race tomorrow.