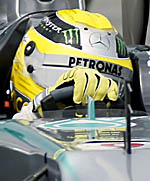 The FIA has issued an official statement to the media as the row over Mercedes 'secret' test with Pirelli at Barcelona rumbles on.

At the beginning of May, the FIA was asked by Pirelli if it was possible for it to carry out some tyre development testing with a team, using a current car. Within the contract Pirelli has with the FIA as single supplier, there is provision for them to carry out up to 1000km of testing with any team - provided every team is offered the opportunity to do so.

Pirelli and Mercedes-AMG were advised by the FIA that such a development test could be possible if carried out by Pirelli, as opposed to the team that would provide the car and driver, and that such tests would be conditional upon every team being given the same opportunity to test in order to ensure full sporting equity.

In addition, with regard to the application of the sport's rules, including principles of sporting equity, it should be remembered that the International Sporting Code provides that on the basis of a report of the stewards of the meeting, or on its own initiative, the prosecuting body of the FIA may bring a matter before the International Tribunal.

The Tribunal may decide to inflict penalties that would supercede any penalty the stewards of the meeting may have issued. Such procedure would be followed in pursuance of the FIA Judicial and Disciplinary Rules.