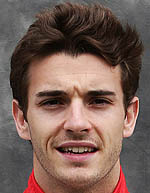 A challenging weekend in the desert continued into the race for the Marussia F1 Team today, when both Jules Bianchi and Max Chilton suffered a turbulent time with tyre degradation.

Having started the race in P19 and P20, Jules and Max both made excellent starts and were soon up to P18 and P19 respectively, getting ahead of both Caterhams. Both drivers demonstrated good pace in the early part of the opening stints, but the challenge posed by the tyres was so significant that they completed four pit stops apiece, putting them back down the field and placing the emphasis on bringing both cars home.

Jules Bianchi: "A really difficult race for us today and a tough weekend all round to be honest. I was hoping that things might improve for the race, but we really struggled with the tyres. On my fourth stint the plan was to go to the end but we had to pit again. From there it was just about making it to the finish and holding position with the cars around me. There isn't much more to say about here; it was not destined to be our race and we are at the stage where we need to implement the next round of upgrades, which of course are coming right when we need them for Barcelona. My thanks to the pit crew today for a busy day of pit stops and for keeping their spirits through the weekend."

Max Chilton: "Despite a difficult weekend for us here, there were some encouraging signs in the race today. I got a really good start, which I was very pleased with, and this meant that we were able to leapfrog both of the Caterhams for a while. Unfortunately we struggled on the tyres and it wasn't long into each stint before we hit that window again. I'm pleased that I have demonstrated that I drove to the pace of the car today and although we weren't in a position to race who we want to be, I did at least have a good battle with my team-mate."

John Booth, Team Principal: "A difficult weekend continued into the race unfortunately. Our performance today was defined by the fact that this track just hasn't played to the strengths of our car and at the same time as this has hurt us, the cars around us have made their own progress. It was also a busy race in the pits today, given the higher tyre degradation that we experienced. All in all, I believe we got the most out of the car today, but clearly we need a good step for Barcelona to maintain our objective of continuous improvement throughout the year. We head back to the UK now for a busy few weeks in the factory preparing our upgrades for the start of the European season, whilst analysing what we've learned at the last two races. I'm sure that the result of this work will be a much-improved car for the next race and we can get back to competing where we want to be."