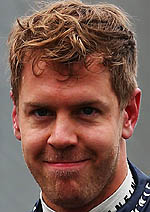 As the F1 circus pitches tent in China following the break after the controversial Malaysian Grand Prix, a defiant Sebastian Vettel has said he doesn't apologise for winning.

The third round of the championship has been given added spice by the move which saw the German ignore team orders and battle his Australian teammate Mark Webber for the win rather than holding station.

With Webber due to attend Thursday's FIA press conference, during which time the Sepang saga is sure to be the subject on everyone's mind, Vettel has once again stolen the Aussie's thunder making it clear that he has no regrets.

"In Malaysia we were surprised being at the top," he said in an interview for team sponsor Infiniti. "The whole race we worked well with the tyres. I think that's what people forgot. Obviously what stuck to their heads is the way the race ended but I think as I said there's not much more to add than what happened.

"I told the team straight after, I apologised for putting myself above the team, which I didn't mean to do" he continued, "but there's not much more to say really. I don't apologise for winnin, I think that's why people employed me in the first place and why I'm here. I love racing and that's what I did."

Looking ahead to this weekend, he said: "Obviously we learned quite a bit from the first two races. China will be different again, different circuit, different climate. So I think we're still in the learning process. Obviously the first two races helped a lot and I think it was very obvious to see that working with the tyres and trying to make the tyres last is crucial. It determines your strategy and therefore determines your race and the result.

"I think we've still got a lot to learn but we made some improvements and we tweaked the car a little bit to help that. But on the other hand we'll still have to come here, come to China, set the car up on Friday, see where we are, see how long the tyres last and go from there."