Vettel revealed as a liar 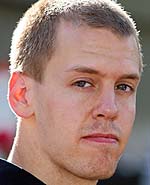 As the Sepang Saga rumbles on, an interview with the sport's official website reveals what many already suspected, that Sebastian Vettel can be economical with the truth.

Ignoring his laughable response, "many - some from way back, some quite recently", when asked about the most memorable overtaking move of his career, and the claim that the funniest person he knows is "Bernie Ecclestone", we have to take issue with his claim that his worst ever haircut was his "short hairdo at the beginning of 2007".

A downright lie, he has had far worse haircuts, the current 'style' being a clear case in point. However, just in case it's slipped his mind - much like the instructions in Malaysia - how about this 'Barnet' shot from Melbourne 2008 (right). Clearly a self-imposed quickie with the Wahl at the back of the motorhome. 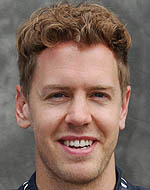 Then there's the official chop for 2013 (left), something that even Eddie Jordan wouldn't be seen dead with. And rightly so.

All credibility lost, Vettel's other revelations in the F1.com Q&A include the 'fact' that his favourite drink is "Red Bull and apple spritzer!", his favourite actor is "John Travolta" and the best excuse to give his team boss after crashing the car is... wait for it... "I am always honest... even to my disadvantage".

And what is it with those white sunglasses?