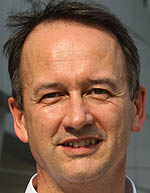 Ninth place in Malaysia and some rusty race craft is all McLaren can fairly expect of Sergio Perez until the Woking squad can improve its troublesome MP4-28, according to the team's Managing Director, Jonathan Neale.

"We haven't given him the easiest first couple of races," Neale admitted in the latest Vodafone McLaren Mercedes phone-in. "He's had a lot to learn in terms of getting used to us as a team, the way that we go about things.

"Obviously he's with a new team of engineers, but he's been a real pleasure to work with and everybody in the team has been impressed."

Perez's performance in the opening two races has come in for some criticism after he failed to defend with the rigor expected of a McLaren driver. However, Neale feels that his drivers can't be judged too harshly at this stage given the team hasn't lived up to its end of the bargain.

"We need to get the car up so that it's capable of winning races and then I think there's a lot of pressure on the drivers at that point. At the moment we haven't done that."

McLaren has endured a difficult start to the season by its own lofty standards, and while Malaysia was an improvement over Australia there is still some distance to those at the front.

"We were closer on the pace there," Neale said of the Malaysian weekend. "Taking the learning from that weekend we're taking a number of upgrades to China.

"Some are just part of our routine upgrade package and some are in response to what we're trying to do at the moment."

A key part of the team's focus has surrounded understanding the fundamental issues from which the car suffers. There is not one, says Neale, but a number of niggling issues which combine to leave Button and Perez squabbling with the Force Indias rather than the Red Bulls.

"I believe that we do know where the problems on the car are," he said, "but in order to be absolutely sure about that we need to have run the package that we're going to run in China.

"There is no one thing, no one magic bullet; there are a number of things that will restore the performance of the car," he added. "We believe that we've got a very good underlying package but it's clearly not the performance that we predicted.

"We've got a lot of work to do on Friday as we learn more about the car and learn what, if any of the upgrades that we've taken, work. It will be a very busy day for Sergio and Jenson."