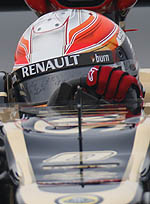 Ahead of today's sole practice session the air temperature is 22 degrees C, while the track temperature is 32 degrees C. Following a couple of rain showers earlier it has now dried up and the sun is shining. However, there is prospect of further rain this afternoon, shortly ahead of qualifying. There are certainly some ominous clouds in the distance.

As expected, Red Bull dominated on Friday, with Sebastian Vettel setting the pace in both sessions. However, until their problems in the final few minutes of FP2 Mercedes was looking good, Hamilton heading off into the gravel as a result of a damaged floor while Rosberg parked up with a gearbox issue.

Unlike 2012, both Ferraris are strong here, with Massa appearing to be a man/driver re-born and ready to give his illustrious teammate a challenge. Lotus also looks good, Grosjean raising his game in FP2, while kudos also to Adrian Sutil who performed miracles in the Force India and showing no signs of 'ring rust'.

The big disappointment however is McLaren, the mood in the Woking camp summed up by Martin Whitmarsh who described Friday as one of the most difficult days of his career. Of course, the problems weren't restricted to the track, the team beginning the day by announcing the end of its partnership with Vodafone.

Problems also for Williams which is clearly struggling with its new exhaust, though Valtteri Bottas gave a good account of himself.

At the wrong end of the timesheets it was the usual suspects though someone appears to have forgotten to tell Jules Bianchi that he's in a Marussia, the Frenchman hassling the Toro Rossos.

Gutierrez is first out when the lights go green, the Mexican followed by Vergne, Ricciardo, Hulkenberg, Grosjean, Raikkonen and Bianchi.

As expected, tyre degradation is high, the supersofts, in some cases, only good enough for one lap. As a result it's thought that most drivers will want to to get the supersofts out of the way as soon as possible come Sunday. It is also thought that this could lead to all sorts of gamesmanship in qualifying with drivers opting to miss Q3 in order that they have a tyre advantage on Sunday. Then again, McLaren, at this stage, doesn't appear to have that luxury.

Unlike FP1 there is action from the outset with names on the timesheets within minutes of the session getting underway; Webber heads Pic, Van der Garde, Sutil, Button and Perez.

Already Button is complaining of understeer and graining, a problem no doubt exacerbated by the cooler conditions. Meanwhile, Webber has improved with a 1:30.288.

No sooner has local hero Daniel Ricciardo gone quickest (29.976) than Vergne and di Resta go quicker before they too are eclipsed by Alonso who posts 27.537.

A 27.407 sees Massa go quickest as the dark clouds close in. Indeed, Chilton is warned that the rain will arrive within the next ten minutes.

As Grosjean goes quickest (26.929), mechanics are working on Perez' car in the McLaren garage. Indeed, the Mexican is out of his car.

With 43:30 on the clock the rain starts to fall and accordingly the drivers dive into the pits.

Interestingly, moments earlier the FIA issued a statement relating to problems the teams have been experiencing problems, with a number of the standard features and alerts usually under race controls finger are not working. Apparently it's all down to mice nibbling at cables.

Confident that there will be no rain tomorrow, though we may well have a wet qualifying session, the drivers sit tight. That said, Martin Whitmarsh reveals that teams would rather not run and save tyres, just in case.

After a short while, Massa returns to the track, on wets, as do the Sauber duo. Though the rain has eased off, it is still very wet and a number of corners, particularly 11 and 12, are very slippery. There is also a fair amount of standing water.

More and more drivers join Massa on track, indeed, within a few minutes Vettel, Alonso, Maldonado and the McLaren duo are the only drivers not on track.

A number of drivers run wide, the cameras picking up on Bianchi in beautiful slow-mo in T14. Rosberg complains that he cannot get heat into his tyres, a perennial problem at Mercedes no matter the weather.

Gutierrez, Rosberg, Vettel and Webber are the first to switch to Inters as a dry(ish) line appears. The Mercedes duo also, Rosberg (wet) complaining of oversteer and overheating. Bottas runs wide at T15.