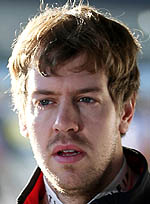 After a surprisingly quiet session earlier, particularly the first fifty minutes, we are expecting more action this afternoon as drivers focus on longer runs as they look ahead to the remainder of the weekend.

This session should also give us a better idea of how the tyres are standing up, there being conflicting reports this morning.

Sebastian Vettel picked up where he left off in Brazil, while Ferrari, in particular, looks much stronger. Good showings from Hamilton, Webber and Raikkonen also. On the other hand, both McLarens were over a second off the pace. That said, it's early days. Very early days.

All this morning's running as on the medium rubber with the super-softs sure to make an appearance this afternoon.

The lights go green and Raikkonen is first out followed by di Resta. As The Finn begins his first flying lap - straight to work in this session - Vergne, Perez, Bianchi and Ricciardo head down the pitlane.

Having eased off Raikkonen crosses the line at 1:32.967, next time around he posts a far more sensible 29.012. Perez goes second (30.060) ahead of Ricciardo, Bianchi, Vergne and Pic. All but the Red Bulls and Ferraris on track.

Running in tandem with his teammate, but a lap ahead, Hamilton goes quickest with a 27.882. Shortly after, Rosberg runs wide at T1.

No sooner has Raikkonen retaken the top spot (27.606) than Vettel bangs in a 26.604 to re-establish the order. Elsewhere, Hamilton follows his teammate's example and runs wide at T1.

As Webber heads down the pitlane, both Ferrari remain defiantly in their garages.

As the Ferraris come out to play, both on heavy fuel it is believed, Webber runs wide at T4, one of several drivers to do so. Nonetheless, he subsequently posts a 26.968 to make it a Red Bull 1-2.

Alonso's first flying lap, as we said, believed to be on heavy fuel, sees the Spaniard go fifth, whilst a 26.776 sees Hamilton split the Red Bulls.

Twenty minutes into the session, Bottas is the first driver to make the switch to super-softs. Elsewhere, Massa goes sixth (27.512), slotting in behind his teammate.

Surprisingly, Bottas can only manage a 29.386 on his first lap, thereby moving up to fifteenth. Maldonado and Vergne have also switched to the softer rubber.

Maldonado, on the supersoft rubber, improves to thirteenth while Vergne goes fifteenth, Bottas having slipped down to seventeenth.

As Giedo van der Garde is beached in the gravel at T3, we welcome back Captain No Grip… as Jenson Button complains of problems with his rears. Van der Garde's car is winched to safety, not the most auspicious of debuts.

His cars down in ninth and eleventh, both over 2s off the pace, Martin Whitmarsh admits that the McLarens are lacking pace.

A big lock-up for Gutierrez, the Mexican currently thirteenth. Elsewhere, Alonso, on the supersofts, goes quickest in the first two sectors finally crossing the line at 26.748 to go second, 0.474s off Vettel's pace.

Webber is next to switch to the softer rubber, the Australian immediately going quickest in S1. While he loses time in S2 he makes up enough in S3 to cross the line at 26.172 a thereby go quickest.

In the McLaren garage mechanics are working on the front of Perez' car. Back on track, Vettel, on the softer rubber, goes quickest in the first two sectors before backing off after losing time behind Maldonado.

It would appear that the supersofts are really only good for one seriously fast lap indeed, some are claiming that they don't even last a full lap.

Rosberg improves to third with a 26.322, his teammate one of the few not to have posted a time on the softer rubber yet.