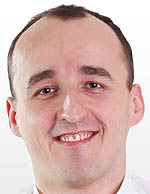 Robert Kubica confirmed his 2013 rally programme at a press conference in Warsaw today. The Polish driver will contest seven rounds of the WRC and four rounds of European Rally Championship - including his home event, Rally Poland in September.

His partnership with Polish oil company Lotos (principal sponsor) and Citroen was also confirmed. Kubica will drive a Citroen DS3 RRC with one of the most experienced Polish co-drivers, Maciek Baran. The pair will contest WRC-2 championship, choosing seven events in Europe. Kubica will skip two overseas rallies (Argentina and Australia) and the season finale in Great Britain. In addition to the WRC-2 programme, the Polish duo will take part in four rounds of the European Championship: next week's Canaries Rally, Rally Azores, Tour de Corse and Rally Poland.

"This is one of the most important days in my motorsport adventure," said Kubica. "I say 'adventure', because for me it's a change of discipline. Thanks to Lotos and Citroen we can compete in European and World Rally Championships. I hope we will have a lot of fun and we will gain a lot of experience.

"Everything will be new," he continued, "it's a season full of surprises but nevertheless we are looking forward to scoring some good results. This decision wasn't an easy one. Everything I do in my life, I do with one hundred per cent commitment. My approach to rallies will be the same, but I will not put racing aside. Probably I will test a lot on circuit this year, but only if my rally schedule allows it.

"The most important thing to me was to come back to competing at highest possible level in motorsport. I guess it worked out - only Formula One is at a higher level than World Rally Championship, although in fact it is impossible to compare these two series. These are two different kinds of sport, so it's like comparing one of the most famous marathon runs in the world to 100 metres sprint run during Olympic Games.

"Each and every rally will be new to me. This year Rally Portugal will be the hardest. Although some sources apparently claim that I have already done some test on gravel, in fact I haven't done it yet. We will test after the Canaries Rally. Rally Portugal will be my first world championship event, first gravel rally and for the first time I will tackle such long stages - one of them has over 50 kilometres. It will be a steep learning curve for us.

"My goal is clear," he concluded, "to learn, learn, learn. Experience is essential here, more important than in racing. On circuits we do a lot of laps, the driver knows the track by heart. Here you have to trust the pace notes completely. For me it is important to work on my pace notes system, I feel it can be improved and this is the key to success."