Glock out at Marussia? 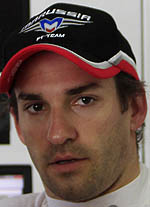 According to reports in the German media Timo Glock has lost his drive at Marussia, the Russian outfit claiming that it cannot afford to honour his contract.

According to Sport Bild Plus, Glock, whose contract with the team runs until the end of 2014, has a mutual agreement with Marussia to end the partnership.

"I have Marussia to thank for three great years," he told quoted as saying. "We part in friendship."

While unwilling to say more, it is understood that the German is said to be considering a move to DTM. "I want to meet new challenges and continue my way in motorsport," he added.

Glock, who entered F1 in 2004 with Jordan and has contested 91 Grands Prix in toal, including his stints with Toyota and Virgin/Marussia, is a product of Formula BMW Germany, having won the championship in 2001. Consequently it is entirely possible that he could find a berth in DTM with BMW alongside Andy Priaulx, Augusto Farfus and Martin Tomczyk.

If the story is true, such a move would mean a third vacancy on the 2013 grid, alongside that at Force India and Caterham however, the need for money would seriously compromise the number of drivers willing to step in and partner Max Chilton who is already rumoured to have taken a significant quantity of cash to the Banbury-based out fit.

Amongst those drivers still seeking seats, and known to have some funding, are Vitaly Petrov and Bruno Senna, while earlier today Sebastian Buemi tweeted that he had "some important news very soon".