FIA: Vettel has no case to answer 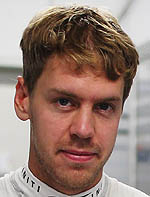 Despite the best efforts of sections of the media and fans with a vested interest, the FIA claims that Sebastian Vettel has no case to answer in relation to the overtaking incident involving Jean-Eric Vergne during Sunday’s Brazilian Grand Prix.

With the Kobayashi incident explained as being a yellow and red 'slippery surface' flag as opposed to a yellow 'caution', when a video appeared on YouTube appearing to show the German passing Vergne under a yellow it was an opportunity too good to miss.

Eventually, having seen the footage, Ferrari contacted the FIA but the sport's governing body appears to back up comments made earlier in the day by Charlie Whiting who said there was no case to answer.

"The incident wasn't reported to stewards in the first place because it didn't seem like there was a need to report it at the time," Norman Howell, the FIA's director of communications told the BBC. "Now that Ferrari has sent us a letter asking for an explanation we will give it to them."

Earlier, Whiting told Auto Motor und Sport: “If the lights are not installed on a post and the first signal a driver is shown is a yellow flag, and then the yellow flashing light, then the overtake begins at the flag.

“Conversely, the same goes for the green light," he continued, referring to the marshal seen waving a green glag in another video clip. "In Vettel’s case, between the last yellow light and the green light, a green flag was waved; the distance there is 350 meters. Vettel responded to the flag, which makes everything alright.”

While the debate rages on the internet, Red Bull has chosen to maintain a dignified silence.