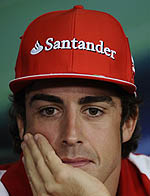 Despite losing out to Red Bull in both title fights, it isn't all doom and gloom for Ferrari as the Italian outfit will pocket more prize money than the champions.

Having won the title, Red Bull will receive, according to our friends at Formula Money, around £54.3m ($87m) from Bernie Ecclestone, hence the ability, as reported elsewhere, to be able to hand every single team member up to £10,000 in bonus money.

Without the additional 2.5%, the difference in prize money between first and second in the championship is understood to be around £3.7m ($6m)

However, while Red Bull team members anticipate the welcoming, gentle thud of their bonus dropping through the front door, it is believed some members of the Italian team will be receiving envelopes containing something entirely different.