Lowe: We just need to win 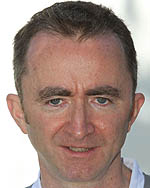 It may be down, but McLaren is not out, according to its technical director Paddy Lowe.

Neither Lewis Hamilton nor Jenson Button remain in the Drivers' Championship hunt, while the team trails leaders Red Bull by 101 points in the constructors' title fight with just 129 left on offer. It makes for difficult reading at the McLaren Technology Centre, but Lowe is adamant the team won't give up that easily.

"The Constructors' Championship is very, very difficult," he conceded during the latest Vodafone McLaren Mercedes Phone-In. "Of course we won't give up, and the way of not giving up is to just treat one race at a time… We'll still go out and try to win all three of these last races."

The Woking squad must outscore Red Bull by more than thirty points a race, all but necessitating having both drivers on the podium while hoping misfortune strikes the Milton Keynes squad. "We'll do our best to win (and) get two people on the podium," said Lowe. "That's our ambition. If at the end of it what pops out is that we've won a championship because we've done well and misfortune has struck others then that will be fantastic, but if you look at the points table that would be quite a stretch to imagine."

It's a task not made any easier after scoring just a single point in Korea before struggling in India. Key to the team's woes last weekend was its performance on the soft compound Pirelli rubber, which will be used again this weekend in Abu Dhabi.

"There is something about the nature of that track that seems to be quite unusual," admitted Lowe, dismissing suggestions McLaren could struggle again on the soft tyre. "We've had that compound already this season and it hasn't been a problem at other circuits, so hopefully it shouldn't be a problem this weekend."

If the tyres aren't a concern qualifying anywhere other than the front row is. The Yas Marina circuit has proved difficult for overtaking, even with KERS and DRS, leaving Lowe concerned it could generate a processional race like that seen in India.

"We'll have to see how this event goes. Abu Dhabi has also been one of the more difficult ones in terms of overtaking, even with DRS," he said.
Abu Dhabi will feature two DRS zones, one on each of the long back straights. With comparatively slow corners leading on to the straights, and heaving braking at the end, Lowe hopes the system will be more effective than they were in India.

"In terms of overtaking the DRS seemed particularly ineffective (in India)," Lowe opined. "Several people were stuck behind cars for long periods of time, I think Kimi was the most extreme example of that.

"You could set yourself, gain some time in the first sector, get yourself just about in DRS reach," he continued. "Then through the cornering sequences, because of the effect of the (aerodynamic) wake, you lost that gap again."

With four race wins in a row the odds are stacked in favour of Red Bull. A victory would all but seal the constructors' title for the third consecutive season - one needs to wind the clock back to 1991 for the last time McLaren achieved its last hat-trick (it actually claimed four in a row from 1988).

"Nobody finds it more frustrating than us," Lowe sighed. "We've missed a lot of championships over the last decade, many of them missed by just one point. So the record books in terms of championships don't make great reading, with only Lewis' championship in 2008, but there have been an awful lot of second places.

"If we take the last five or six years I think we've been the most consistent team from the point of view of winning races and constructors' positions. That's a point of great satisfaction but also great frustration because what we really want is the top step."

One title that could go McLaren's way is holder of the longest streak of points finishes in Formula One. Currently McLaren and Ferrari share the accolade on fifty-five races, which McLaren could surpass this weekend. It's small consolation for a team whose last Constructors' Championship came fourteen years ago.