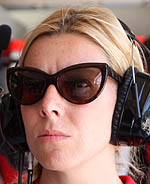 Three months on Maria de Villota has revealed that she remembers much of the testing accident which claimed her right eye. Speaking with Spanish magazine Hola the 32-year-old has revealed that the incident, which sent shivers up the spine of world motor sport, has left her with a new perspective on life.

"Now I have only one eye, maybe I perceive more things than before," she said. "Now I see you have to stop and measure things in a different way. Now it's not about the tenths on the clock but about the little moments."

As the motor sport world held its collective breath de Villota, who now wears an eye patch, has confessed that while she remembers the accident the gravity of it was not immediately clear to her.

"I remember everything, even the impact," she admitted. "When I woke up with everyone around me, I started to speak in English as I thought I was on an FIA check-up and that the nurse was a trainer. My dad said: 'Please, Maria, speak Spanish because your mother is missing half the things'. Then I became aware of everything, of what had happened, where I was and why.

"In the beginning they were covering my eye so I couldn't see it," she continued. "The first day I looked at myself in the mirror I had 140 black stitches on my face, and they looked like they had been stitched with a boat rope. I had lost sight in my right eye. I was terrified."

Three months on and her rehabilitation continues. More surgery is planned but de Villota revealed she now suffers with headaches as a result of the crash. "They don't know how long that will last," she confessed, "maybe years. I have also lost (some) smell, and taste, which is linked to smell."

De Villota believes it's important that lessons are learnt from her accident and advocates improved safety standards under all circumstances. "I want to help with a view to the future and improve safety, especially in aero tests," she said. "At the circuits everything is under control, but not in this kind of test."

Speaking with Pitpass in July team boss John Booth was in no doubt as to the impact the incident had on his team. "It was probably the toughest time I've experienced in my professional career," he confessed. "I'm sure that's the same for all the guys because they were there at Duxford.

"I think it affected us all very deeply," he added. "That will stay with us forever."