Caterham fined, no further action re Webber or Schumacher 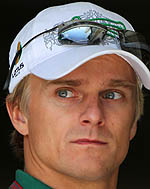 Caterham has been fined 10,000 euros for the unsafe release of Heikki Kovalainen during the Finn's pit stop.

The Caterham driver, who had avoided the first corner carnage but subsequently lost positions due to a mistake at the chicane, clipped the rear of Narain Karthikeyan's HRT having been released as the Indian was entering his pit.

On an unusually busy day which kept them working late into the night, the stewards later ruled that Caterham had unsafely released Kovalainen, a breach of Article 23.12 of the FIA Formula One Sporting Regulations, earning the Anglo-Malaysian outfit a 10,000 euro fine.

In the case of Webber, who was alleged to have beached of Article 23.12 of the FIA Formula One Sporting Regulations (unsafe release from a Pit Stop) they ruled: "The Stewards noted the evidence that indicated the driver of car 2 was aware of the approach of car 6 into the pit lane and deliberately, after being released, kept to the right and momentarily lifted throttle to follow car 6 to enter its Pit unimpeded, before car 2 turned out into the fast lane."

While in Schumacher's case, the Mercedes driver having "appeared to make a sudden change in direction at the Pit Entry, when in close proximity to car 1", they ruled: "Red Bull Racing admitted to the Stewards that their instruction to the driver of car 1 was to 'do the opposite of car 7'. Therefore when car 7 headed for the pit entry car 1 aborted its entry to the Pits."