Penalties for Schumacher and Webber 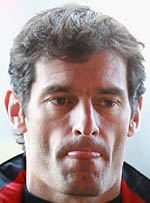 Red Bull has been forced to make an unscheduled gearbox change to Mark Webber's car ahead of Sunday's Belgian Grand Prix.

The change will see the Australian drop five places on the grid, since Webber finished the Hungarian Grand Prix he was not entitled to a new gearbox under the regulations. It is the second time in three races gearbox concerns have cost Webber, who was also faced to take a grid penalty at the German Grand Prix.

Michael Schumacher also copped a penalty in what will be his 300th Grand Prix. During Friday's second practice session the German failed to use the entry road when making his way in to the pits, for which stewards elected to fine him 2,500 euros.

This weekend Schumacher becomes only the second driver to compete in 300 Grands Prix, behind former Ferrari teammate Rubens Barrichello.

Schumacher made his Formula One debut for Jordan in the 1991 Belgian Grand Prix, before winning his first of 91 Formula One victories at the circuit the following year at the wheel of a Benetton.