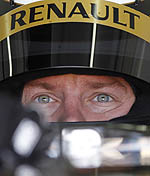 Lotus F1 Team finished in a fighting fourth with Kimi Raikkonen at the German Grand Prix, whilst Romain Grosjean battled back from first lap wing and tyre damage to finish in eighteenth position at the Hockenheim circuit this afternoon. Despite having yet to join the list of seven race winners thus far this season, Kimi moves up to an impressive fourth place in the Driver's Championship whilst Romain drops a spot to eighth. The team also moves down one place to fourth in the Constructors' Championship, just one point off third position.

Kimi Raikkonen: "We did the best we could today from the position we started. My start was okay, but then I think Lewis [Hamilton] had a problem in front of me and I had to slow down to avoid hitting the back of his car. This let Paul [Di Resta] through in the DRS zone and from there we had a big hill to climb as it was tricky to get back past. Maybe if we had found a bit more pace in the wet yesterday we could have started higher and pushed the leaders, but it is what it is. For sure we were hoping for a bit better here, but the car worked well all through the race and we still brought home some good points for the team so there are some positives to take to the next race."

Romain Grosjean: "We were on the back foot from the outset after the grid penalty and nothing went right today. It's a shame as I had a good start and took a few places in the first corner. Then on the straight there was contact and that was the race pretty much ruined for me. I'm not sure exactly what happened - we'll have to look at the on-board footage to get a better idea - but my car was badly damaged with a broken front wing and a puncture. By the time I managed to get back to the pits the race was as good as over. You never want to have these kind of weekends, but it happens. It will make us enjoy the next good race even more."

Eric Boullier, Team Principal: "We saw a great recovery from Kimi after yesterday's issues. It was a very strong and experienced drive coupled with a good strategy from the team. Starting in tenth and nineteenth positions we were always going to have our work cut out, so it's good to see Kimi score big points again and display strong race pace. With Romain it was a difficult first lap and he had to fight with a damaged car from then on. We have all seen him have very good weekends, so we need to ensure that he has solid weekends even when circumstances mean he starts from the back of the grid. As a team we had the same pace as the frontrunners so there is no question about our capacity to score podiums and maybe a win one day."

Alan Permane, Director of Trackside Operations: "Romain was compromised by his first lap incident which severely damaged his floor, losing him a lot of downforce. With Kimi moving tenth to fourth we saw the strategy work as we wanted it to. We were hoping to be able to get on the podium but the first few laps cost a bit too much time. Ultimately we could run at the pace of the leaders, but we were just too far back to make the top three today. It's a familiar story we know all too well ; we have to qualify better to get stronger results. The wet weather of Saturday really hurt us in qualifying here, so hopefully we can bounce back in Budapest and do a good job."

Ricardo Penteado, Renault Sport F1 Team Support Leader: "Hockenheim is a tough race on engines, with high top speeds around the first part of the lap but a twistier section in the back stadium section. Fuel consumption is also very high which was something we needed to watch throughout the race. It was a great performance from Kimi. He had the same pace as the top three, but starting in tenth he was not going to be able to realistically fight for the lead. Romain had a long race after the first lap incident so we decided to run some safer engine settings to be able to be more aggressive in the race where the engine will be used next."