What does the future hold for Lewis Hamilton? 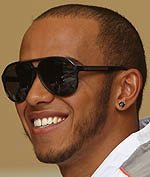 Out of contract at the end of the season, Lewis Hamilton's future has been the subject of increased speculation in recent weeks.

There are conflicting reports as to what his future holds today, with the Telegraph claiming Hamilton could reap as much as £20m a season in a new five-year deal with McLaren while German publication Blick suggests the former world champion could be offered a contract worth only £8m a year - almost 50% less than his current deal.

According to Formula Money, Hamilton is already the sport's second highest paid driver behind Fernando Alonso, who is on an estimated £25m a year with Ferrari. In 2010 Hamilton was paid an estimated £12.5m, a figure which is likely to have increased slightly since.

Hamilton joined McLaren at age 13 and has his apprenticeship through the sport's junior ranks financed by the Woking outfit. He rewarded their faith with the 2008 world championship, having come within a point of claiming the title in his debut season.

The problem for Hamilton is there are precious few berths available should he seek a fresh challenge, which gives McLaren leverage when it comes to contract negotiations.

There have been suggestions that Red Bull will look to replace Australian veteran Mark Webber, who has been linked with a move to Ferrari in recent weeks. However with a string of cheap junior drivers waiting in the wings to partner Sebastian Vettel it's difficult to see Red Bull splashing out upwards of £8million a year for Hamilton. The team is famously low paying, its drivers boosting their earnings through performance bonuses.

A move to Ferrari, where he would join Fernando Alonso, is equally unlikely. The pair didn't work well together at McLaren and there is no reason to suggest it would work at Ferrari where the Spaniard is clearly 'numero uno'.

Elsewhere Lotus seems content with its driver pairing. Kimi Raikkonen and Romain Grosjean are working well together and it's worth remembering Grosjean is managed by team boss Eric Boullier. The pair have been standout performers of 2012, and even if the team was looking to replace one of its drivers it's unlikely it would be in a position to meet Hamilton's financial expectations.

Therefore it seems the only team other than McLaren in a position to offer a competitive car and a contract that meets Hamilton's demands is Mercedes. The future of Michael Schumacher is unclear and should the German choose to retire the team will be on the market for a new driver. It has the resources to afford Hamilton and is becoming increasingly competitive, with the further enticement of the opportunity to drive alongside friend and former karting teammate Nico Rosberg. However Norbert Haug has recently said the team is monitoring Paul di Resta and has made no overtures in regards to Hamilton.

Therefore it leaves McLaren as the only realistic option and consequently it seems extreme to think Hamilton could be offered £100m over five years. It seems equally strange that he may be offered a 50% pay cut, which suggests the truth is somewhere in between.

The Telegraph, which claims Hamilton will be offered £100m, also suggests that XIX Entertainment is seeking greater freedom with the 27-year-old's image, something that would likely reduce the £20m a year offer it claims Hamilton has been offered.

Meanwhile the Blick claim does make sense if McLaren was going to offer a marginal pay increase when offset with the image control clause mooted by the Telegraph. A slightly reduced retainer, with greater freedom over his image, could ultimately net the former world champion far more than a straight contract with McLaren over the next five years.

Importantly the Telegraph suggests negotiations won't really get going until July or August, when XIX Entertainment boss Simon Fuller is in the UK.

Sources insist that while McLaren will be keen to retain Hamilton, negotiations won't begin for some time and when they do it will be well away from the glare of the media spotlight.

Until then everything you read is pure speculation.