Schumacher calls for wider debate on future of F1 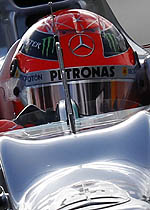 Concerned at the direction the sport is taking, whereby the sport is sacrificed for the show, Michael Schumacher has called for a wider, general discussion.

In recent weeks the German has been critical of the Pirelli tyres, at one stage allegedly saying that driving on them was akin to driving on raw eggs.

While some have immediately jumped to the Italian manufacturer's defence, feeling that the German's comments were a case of sour grapes at having failed to come to grips with the new rubber, particularly after enjoying such a close relationship with Bridgestone, others agree, suggesting that the new tyres are having too much of an influence.

"I am quite happy that we have initiated a discussion about how much influence one or another part should have in Formula One," the German told reporters at the Circuit de Catalunya.

"It is certainly nothing to do with me being 'frustrated'," he continued, "because I haven't really been frustrated. I did a good race (in Bahrain) and came from 22nd and finished 10th which I think was a positive result.

"It's nothing to me," he added, "it's a general discussion that I wanted clearly to start to happen."

While Pirelli was given a clear mandate to produce tyres that would degrade more easily and thereby cause drivers to favour a more strategic approach, some feel the whole thing has gone too far, witness drivers not running in Q3 in an attempt to save rubber for the race.

If those involved in the sport, and even fans, can put their feelings about Schumacher aside, the fact is the German has a point and there is a need for discussion. Pirelli was called upon to do a job and it has done it however, the fact remains that perhaps in seeking such a gimmick the sport's powers that be have further damaged Formula One's purity.

Shortly after the end of qualifying on Saturday, football fans in England will witness not only the battle between Manchester United and Manchester City for the Premiership, but other clubs (including Tottenham Hotspur) battling for places in the Champions League while those at the foot of the Premiership fight against relegation. It will be an intriguing, absorbing day, and not a gimmick in sight.