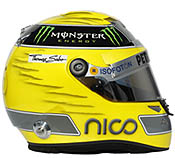 Nico qualified fifth and will start on the third row, having completed a single run in each qualifying session. Nico is the only top-five starter to have a fresh set of option tyres available for tomorrow's race. Michael was knocked out in Q1 after a DRS failure on his quickest lap cost him around half a second. The top 18 cars in Q1 were separated by just 1.051s, and eight different teams are represented in the top ten for the race.

Nico Rosberg: "In general, I felt very comfortable during qualifying today. However, as we have been focusing on our race pace, there is always a compromise in the qualifying set-up. I think that I'm in a good position for the race for tomorrow. I am the only driver in the top five who has a set of new option tyres which can be very useful at this circuit. It will be very important to drive carefully, and find the right tyre management in the race, as the conditions are very tough out there."

Michael Schumacher: "I am obviously very disappointed to have qualified in 18th position on the grid for a race which looks to be quite competitive for us. Unfortunately on my fast lap, which was looking quite good, my DRS broke in the last sector. We tried to fix it in the garage but were not able to go out again. Trying for a lap without DRS on different tyres would not have made sense. We now have to try to see what we can do from here and push as much as possible."

Ross Brawn: "A session of mixed fortunes for the team this afternoon. In Q3, we made the strategic decision for Nico to do just one lap and, although his starting position is not optimum, he is the only driver in the top five to have a new set of option tyres available. This could prove valuable in the race, and we will learn tomorrow if our strategic decision pays off. Looking to Michael, he experienced a failure of the DRS rear wing flap, just before he entered the back straight on what would have been his quickest lap. This cost him around half a second, and with little more than a second separating the top 17 cars in Q1, that proved decisive. Unfortunately, we were unable to repair the system in time for him to run again, and he was bumped down to P18 at the very last moment. It will be a long and interesting race tomorrow, in demanding conditions, and we will look to make the most of our opportunities to achieve the strongest possible team result."

Norbert Haug: "From the outset, our focus at this circuit, where tyre usage and availability of new tyres are crucial, was to be in a good position in that respect during the race on Sunday. We think this is even more important here than on the three circuits that we have already raced at this year. As a consequence, Nico completed just one run in Q3 in order to save a set of fresh options for tomorrow. We knew that this strategy would likely compromise his position on the grid. However, knowing that we will be well-placed tomorrow on the tyre front, I am convinced that this was the right thing to do. Last year, there were occasions when we were more than one and a half seconds behind pole position. Today, with one attempt compared to the two made by the teams ahead of us, we are behind pole by not quite four tenths. We are heading in the right direction, and our team is working in a focused and systematic way in order to achieve our targets. I feel sorry for Michael who had the pace for a good starting position, as he has proven with a fourth place and two third places in Q3 at the previous races. A problem with the rear wing mechanism prevented him from getting a good result - but he can achieve this tomorrow. Michael showed good pace during our long runs and he will be well equipped with fresh tyres. After our great result last weekend with Nico securing pole on Saturday and victory on Sunday, I am quite happy with our performance this weekend so far. Our team has demonstrated that we can be competitive in quite different circumstances. Well done Sebastian on your pole today."