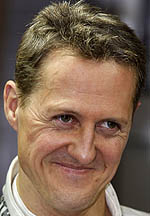 Ahead of today's second session the air temperature is 14 degrees, while the track temperature is 15 degrees. Though there has been no further rain, it remains overcast and damp.

Lewis Hamilton was quickest this morning, ahead of the Mercedes, Sauber and Red Bull duos, but in all honesty such were the conditions it was difficult to get any idea of the true order, the damp and greasy conditions compromising running time and restricting drivers to intermediate tyres for all but the last few minutes of the session.

Even so, with McLaren likely to be changing his gearbox at some stage over the next 24 hours, the Englishman is widely expected to take a five-place grid penalty.

Test and reserve rivers Van der Garde, Bianchi and Bottas, who were all in action earlier, are now performing other duties, handing the respective cockpits back to Petrov, di Resta and Senna.

Kovalainen leads the way when the lights go green, followed by Karthikeyan, Senna, Grosjean, Alonso, Maldonado, Pic and Ricciardo. All are on the prime (medium) rubber. With the improved conditions we are expecting a much busier session this afternoon.

Unlike this morning, within the first few minutes we have times on the boards, Ricciardo, on 39.185, leading the way. Moments later however, Perez posts a 38.785.

Kovalainen runs wide at Turn 10, and Rosberg at the hairpin, proving that conditions are far from perfect. Surprisingly, Alonso is on the soft rubber.

On his first flying lap, Hamilton retakes his top spot, the McLaren driver crossing the line at 36.814. Rosberg goes second, ahead of Webber and Ricciardo.

Lots of drivers, including Schumacher and Maldonado, make mistakes, running wide or locking-up as the underestimate the conditions.

Just ten minutes into the session, all but Alonso and de la Rosa have posted times.

Vettel, having enjoyed a little contretemps with Grosjean, goes third with a 37.162, edging out countryman, and childhood hero, Schumacher.

Now on the prime (medium) rubber, Alonso posts 38.175 to go eleventh. Teammate Massa, who has a massive lock-up going into the hairpin, is currently thirteenth.

As Perez studies data read outs, mechanics are working on the brakes on Button's McLaren.

When Ricciardo complains about the power steering on his Toro Rosso, the legendary Giorgio Ascanelli's response is: "I can fix it, but it will take three months".

Senna takes a massive detour at Turn 1, the Caterham driver using the full length of the escape road that runs parallel to the track.

As Vergne goes twelfth, the cameras pick up on Anthony Hamilton who is spending a lot of time in his old stamping ground at McLaren.

Coming up to thirty minutes into the session, Ricciardo, Vergne, Maldonado and Senna are on options.

Hamilton is told that "the other car" is much quicker in a straight line, the other car being his McLaren teammate. That said, Button remains ninth 0.907s off the pace.

Grosjean enjoys a bit of cross-country, his teammate having encountered a serious DRS malfunction in this morning's session. Elsewhere, a big spin for Kobayashi, the Japanese doing well to keep it under control.

Vettel goes quickest in the first two sectors, finally crossing the line at 36.578 to go quickest. However, Hamilton is also on a hot lap until the Englishman aborts it and dives into the pits.

Webber goes quickest in S2, subsequently crossing the line at 36.867 to go third behind his teammate and Hamilton. Red Bull is running two entirely different exhaust systems today, Vettel using the older version. Next time around, Webber improves with a 36.433 to make it a Red Bull 1-2.

A big lock-up for Alonso as he enters the pits, the Spaniard currently eighth, 1.426s off the pace.