Alonso: Kubica is the best 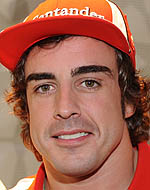 Speaking hours after the accident which has further delayed his return to the cockpit, Fernando Alonso claims that Robert Kubica is the best driver in F1.

As the sport awaited news of when the Pole might return, and with whom, an incident usually associated with slapstick comedy saw the 27-year-old suffer another set back, fracturing his right tibia when he slipped on ice in his garden.

Speaking at Madonna di Campiglio, Alonso revealed that he was among the first to wish his rival a speedy recovery, admitting that he rates the Pole as the best out there.

"For me the best driver is Robert Kubica," the Spaniard told reporters. "I spoke with him yesterday after his accident. When he returns, which will surely be soon, I'm sure he will continue to be the best driver."

When asked if he would like to see Kubica in the other Ferrari, Alonso was quick to reply: "I'm very happy with Felipe."

Meanwhile, team boss Stefano Domenicali denied claims that the team was scheduled to give Kubica time in its simulator, the Maranello outfit long associated with the out of contract driver.

"That was not on our plan," said the Italian. "For sure, Robert Kubica is a great driver that had a very severe injuries and at the moment he is still working very hard to try to go back to his normal living. So before any kind of thinking or discussion of whatever could be, we need to wait and see.

"For sure, that kind of injury is taking a long time to recover so I can say we will wait and see if he is going to recover, but at the moment there is nothing in place."