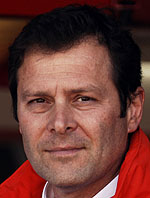 Mercedes has pulled off something of a coup, having signed Aldo Costa and Geoff Willis.

Willis will join the Brackley-based team as Technology Director on 17 October while Costa (right) will begin his role as Engineering Director on 1 December.

Both will report to Technical Director Bob Bell. Costa will be responsible for design and development, while Willis will head the aerodynamics, vehicle dynamics, control systems and simulation functions.

Willis worked at Brackley from 2001 to 2006, and was Technical Director at Red Bull Racing from 2007 to 2009, before taking a consultancy role with Hispania Racing in March 2010.

Costa previously worked as Technical Director at Ferrari, joining in 1996 after eight years at the Minardi team. He won eight World Championships at Maranello, prior to his departure in May 2011.

"I am delighted to announce that Aldo Costa and Geoff Willis will be joining the team," said Ross Brawn. "Geoff is a highly respected engineer with over twenty years of Formula One experience, and we look forward to his arrival next month. Having worked closely with Aldo for many years, I know that he will bring dedication and championship-winning expertise to the team when he joins in December. Building a winning team is an exciting challenge for us all as we work towards the competitiveness and standards that we aspire to as the Mercedes-Benz works team. With a strong technical structure led by Bob Bell, we are moving ourselves into the best possible position to achieve our ambitions."

"Since Mercedes GP was formed as a new team in early 2010, we have been putting in place the building blocks for success," added Norbert Haug. "Our technical organisation was strengthened by the arrival of Bob Bell and, working closely with Ross, he has identified the areas where we can improve still further. Aldo and Geoff will reinforce our technical management and bring the experience required to harness the talents of our people in Brackley; we have also recruited and invested at other levels in order to maximise our competitiveness under the Resource Restriction Agreement. Our goal remains to progress step by step in order to establish ourselves as a front-running team for the long term, in line with the tradition of the Mercedes-Benz Silver Arrows."