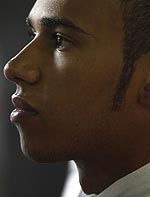 After his worst qualifying session of the season, are further cracks appearing in the Lewis Hamilton brand?

It is a fact that the British media, more so than in any other country, will help build a person into a star and then, when they feel their time is up, deliberately begin tearing them apart.

Be it actors, pop stars, sports stars, writers, politicians or even one of their own, once the mainstream media feels your time is up the process begins… it is brutal and unrelenting.

Such was the venom in one particular tabloid this week, Pitpass editor Chris Balfe contacted a source at McLaren to ask when Hamilton had "peed in the guy's beer". "It's his first race of the year," the source replied, referring to the journo, "he just wanted to return with a flourish".

However, there have been other articles since, some not quite so vicious others more so. Only today, the Montreal meeting with Christian Horner has been 'sexed-up' with the 'revelation' that he "stormed into the Red Bull motorhome".

While he is one of the most entertaining racers out there, Hamilton certainly hasn't helped himself this season. Other than the on-track mishaps and subsequent blame shifting, there has been the open criticism of his team and the ludicrous episode in Monaco when his joke about the stewards fell totally flat.

While the criticism from Niki Lauda and the like was over-the-top, did Lewis really have to say that he "doesn't give a toss" even when the words are uttered by a three time champ and arguably one of the bravest men ever to grace the sport.

In the wake of his dismal qualifying session at Silverstone, Lewis has once again criticised his team. However, it is his subsequent attack on sponsorship commitments that will further raise eyebrows.

While Lewis and his colleagues no doubt have better things to do with their time than making appearances and carrying out stupid tasks for their sponsors it is what pays the bills. It is the photo shoots, the pub quizzes, the flesh pressing and general PR bull that pays for their extravagant lifestyles. While Lewis and his colleagues might hate every cringeworthy moment of it there are countless talented youngsters out there who would do all this and more for the chance to realise their dreams and talents.

Some say that Lewis has changed in recent months, essentially since he took on Simon Fuller as his manager. Others blame his pop star girlfriend and the growing influence of a clique that want to see him escape the confines of F1 and become some sort of global media superstar.

At Silverstone today there will be many thousands of fans cheering him on, willing him on, in their eyes he is a racer, a true hero. However, there will also be a media looking for the next slip, ruthlessly seeking the next opportunity to take a swipe.

Only Lewis can decide which group goes home satisfied. While one group has endless patience there may come a point when the other stops defending him.