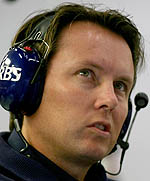 How has winter testing gone and how confident are you in the design of the FW33?
We had a few reliability problems during winter testing but none of the problems we had were major, except perhaps those on KERS that have now been addressed. Some small faults caused some downtime, but that is the result of having such tightly integrated systems on F1 cars now. Encouragingly, we haven't had any issues with the new conceptual areas that we pushed the boundaries on, like the driveshafts. We have successfully completed 4969.2 kilometres during winter testing.

What about the performance of the FW33?
The teams are closer now as a result of the new regulations, which is what they were designed to do. There are a lot of cars within half a second of each other which means if you bring two or three tenths, either from an aero upgrade or some other mechanical component, it could make a significant difference this year. The FW33 has been a good car from the beginning, but in terms of performance we will have to wait until the racing to really see where it stands.

There was a problem with KERS in Barcelona; what was the fault and is this now rectified?
We had a problem with the inverter, which is located between the battery and the Motor Generator Unit (MGU). The main problem was that when we had a failure the inverter didn't isolate effectively. We have therefore put in place design changes to give that isolation, and avoid the fault happening again.. We have a full solution to allow us to race KERS in Melbourne.

How effective do you think the rear wing will be in racing conditions?
In qualifying it will be worth about half a second per lap. During the race, I think it should achieve what it is supposed to, but it may take two or three races for the FIA to fine tune the usage of the system. It should not get to the point where a driver can just drive past another car with ease, but rather it should be a device that gives just a bit more to an already ambitious overtaking attempt.

How are the new Pirelli tyre compounds working?
Degradation was high in the initial tests but in the latest test it started to improve. This is probably because we've increased the downforce on the car and Pirelli have worked on compound changes. I think it will change again when we go to the hotter races because in testing it is relatively cool compared to some of the races. Pirelli have done a good job in the short amount of time they have had and they will keep getting stronger and stronger. In the first two or three races there may be one extra pitstop compared to normal, but I think that will stabilise fairly quickly.

With that in mind, have the team been working harder on pitstop practice?
We have done a lot of pitstop practice at the factory which is what we would normally do. The mechanics test most days in the winter. The wheel nuts and guns are similar to last year, front jack is the same and the rear jack is new. We'll see in Melbourne.

What feedback have you had from Rubens to help set-up the new car?
Rubens is always reserved with his critique of the car, he never gets excited because he wants us to keep pushing, but he knows how to balance that with motivating the team. With the FW33 he has been instrumental to our set-up direction and helps us to understand where we need to improve. He is happy with the directions we are taking, and we've also fixed a few small things like vibrations that were distracting for him and the team last year. Getting on top of those small things helps us concentrate on the big picture.

How would you describe Pastor Maldonado as a driver?
Both determined and talented. Of course it is early days, but he shows a good level of maturity when dealing with the people around him. He is also good at articulating what the car is doing. Xevi Pujolar and Andrew Murdoch have worked well with Pastor over the winter and those relationships with his engineers will pay dividends when we go racing.

Pastor has had less running due to reliability problems, do you think he is ready to go racing?
You will never really be ready as a rookie, but you just need to get out there and do it. Pastor is talented, so what I want to see now is how he deals with the pressures of a race weekend, especially qualifying. He hasn't had as much running as I would have liked him to, but he is someone who we'll support and give space to. His testing performance in the wet was definitely impressive.

Do you feel the team is prepared for the first race in Australia?
Definitely. We would have been ready for Bahrain as well, that is the nature of Formula One. We are always ready for whatever we need to be ready for. It will be good to get the season underway now as it feels slightly strange not to be racing already at this time of the year.