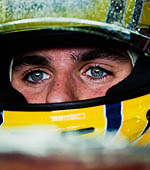 Having burst onto the F1 scene as a fresh faced 19-year-old last year, Jaime Alguersuari has experienced a more low key 2010. With a full year of experience the Toro Rosso driver feels he's come a long way since his debut at the Hungaroring last year.

Graduating from Formula Three in 2008 to Formula Renault 3.5 last season Alguersuari became the youngest ever Formula One driver when he replaced Sebastien Bourdais at Toro Rosso in Hungary. Qualifying last after mechanical problems, he raced his way back to fifteenth, one spot ahead of his teammate Sebastien Buemi.

Now just on a year into his Formula One career Alguersuari suggests too much is expected too soon from young drivers. At the time of his debut he was the youngest driver to ever compete in the discipline. "We need time. Like every other human in life," he explains. "The step between Formula One and the other series is too much. My case was the worst because I had no mileage, and as well I had very low experience in higher categories, not like drivers like Maldonado who was four or five years in GP2, it's a different situation.

"So this is becoming more hard and more tough for us and reach a good level right from the beginning because you need time, and I'm not still at 100%, it's not possible. You need some time to developed, to learn."

A key factor in that learning process has been his battles with Michael Schumacher, with whom Jaime enjoyed a 22-lap tussle in Albert Park at the beginning of the season. Relishing the challenge of competing against the 7-time champion, it gave the Toro Rosso driver a better understanding of tyre management, a crucial skill for 2010, and one he'd struggled with in 2009.

"I've learned a lot with Michael," he claims, "racing all the race against him to understand a bit more the tyres. And in fact the next race after Australia I scored two points because I understood a bit more about the tyres.

"This year you need to deal yourself much more especially with the fuel when you have much more weight in the car. The tyres, they take much more force in the tyres, so they get more used and degrade faster than with less fuel. You need to be careful a lot, especially going smoother with power, leaning on the tyres not to grain them. It's a learning process, and I'm still learning.

"You cannot push every lap 100% during the race, and this is what happened to me more or less last year; two laps fast, then the rest not really good."

With a full season under his belt, and a contract for 2011 in his back pocket, Jaime is now able to approach a race weekend with more confidence, this weekend in Singapore is no exception.

"You need really good traction here. You need a a car which can handle the kerbs. To be honest, with Singapore you never know what it's going to offer you, the weather, if its going to rain.

"These type of races are the ones we need to focus on because it's the one maybe we have a chance, and the driver on the street circuit can do something else that maybe he cannot do at Silverstone, or Spa-Francorchamps, or whatever other track."

The Singapore race is one he's looking forward to, it's a circuit he admits to enjoying more than Valencia. "I think Singapore its more of a fluid track. For sure it's very slow, you accelerate and then you brake, but you can play much more with the car because you have some chicanes and you have some different type of corners.

In damp conditions on Friday morning Alguersuari set the fifth fastest time before falling down the order to seventeenth in the afternoon session. On Saturday morning he was fourteenth quickest.