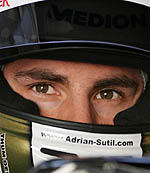 Force India driver Adrian Sutil has been fined by the stewards in Singapore.

The German was penalised following an incident in today's second session. After hitting the kerb at the Singapore Sling chicane (Turn 10), his force India was launched into the air whereupon the car's left-front suspension was badly damaged on landing. Indeed, the entire wheel was left dangling from the car.

Rather than parking the car however, the German attempted to drive back to the pits and it is for this that he has been punished, the stewards claiming that "having experienced serious mechanical difficulties, (he) did not leave the track as soon as it was safe to do so, and this was potentially dangerous to spectators, marshals and other drivers", a breach of Article 30.14 of the 2010 FIA Formula One Sporting Regulations.