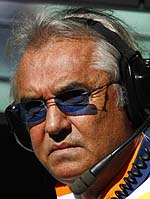 The following press release has been issued on behalf of Flavio Briatore this evening in response to the FIA's decision not to appeal the ruling of the Tribunal de Grande Instance:

Flavio Briatore announced today that he has reached an agreement with the FIA, to put an end to the differences between the parties, caused by the events of the Singapore GP 2008.

By effect of this settlement , the FIA will withdraw its appeal against the decision rendered by the Tribunal de Grande Instance de Paris on January 5th 2010 declaring irregular the World Council's decision issued against Mr. Flavio Briatore on September 21st 2009.

He confirmed his acceptance to bear his share of responsibility in the Singapore events in his capacity of Managing Director of the Renault F1 Team, at the time they happened, without any admission of a personal guilt in these events and without any recognition of the fact that the decision of the World Council rendered against him would have been well-founded.

No further comment will be made by Flavio Briatore, who wishes to put behind this matter and focus on his plans for the future.