Briatore talks of meeting ahead of ban 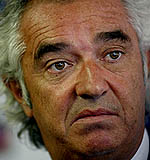 Reacting to the FIA's claim that his lifetime ban from motorsport was the result of an "overwhelming majority" of WMSC members, Flavio Briatore has said he also rejects the suggestion that he has selectively leaked details of his forthcoming case.

The comments follow a brief exchange earlier in the week when the Italian revealed that in addition to appealing his lifetime ban from FIA sanctioned motorsport he is seeking one million euros in damages.

Ahead of his hearing at the Paris Tribunal de Grande Instance on 24 November, Briatore claimed the punishment meted out to him following the FIA's investigation into 'Crashgate' was down to (former president) Max Mosley who was "blinded" by desire for "personal revenge".

In a statement, Briatore said that many of the procedures adopted during the investigation and subsequent hearing were contrary to the FIA's International Sporting Code and the laws of France.

The Italian pointed the finger squarely at Mosley, who - in response to Briatore's role with FOTA, which almost led to a breakaway F1 series earlier this year - "assumed the roles of complainant, investigator, prosecutor and judge".

The FIA was quick to react, issuing a brief statement claiming that the sanction against Briatore, was "made by an overwhelming majority of the attending World Motor Sport Council members".

Furthermore, the FIA condemned the "selective leaking of extracts from Briatore's pleadings", a comment regarded as somewhat ironic by many within the sport considering the constant flow of information that has been made public not only in this case but many others in recent years.

Now, Briatore has followed up his original claim by suggesting that at a meeting which took place ahead of the WMSC hearing "secret negotiations" were held.

"The FIA neglects to mention that, according to declarations by one of its own vice-presidents to the media, the world council's decision was rather the outcome of secret negotiations on the eve of the sham hearing," said the Italian in a statement.

This no doubt refers to comments made by Mohammed Ben Sulayem, president of the United Arab Emirates' Automobile Club (ATCUAE), who - two days after the WMSC hearing on September 21 - claimed that the result of the hearing had been agreed beforehand.

"We are not here to hang teams," he told an Abu Dhabi newspaper on September 23. "We did our negotiations before and everybody is happy with the result. The verdict is fair and everyone is a winner.

"I had to be loyal to my country as well as motor sport," he continued, referring to the fact that Abu Dhabi was on the verge of hosting its first ever round of the Formula One World Championship. "Protecting the investments Abu Dhabi has made into Formula One is my duty; it is a big show and it needs teams.

Referring to Renault, which received a suspended ban for 'the 'Crashgate' scandal, and whose future in F1 was widely thought to depend on the WMSC's verdict, Ben Sulayem said: "We all want to see Renault (in F1). This is the result everyone wanted."

In his statement, Briatore claims that Bernie Ecclestone had a vested interest in the case and its outcome. The Italian says that Ecclestone "took part and was able to vote in the deliberations of the World Council, and was a directly interested party in Renault not suffering a sanction that might discourage it from continuing its participation in the Formula One World Championship and could, moreover, be hostile to Mr Briatore as a result of stances taken by him during the previous year on behalf of the constructors involved in Formula One."

In addition to being keen to see Renault continue in F1, Ecclestone will have also been eager to see the Abu Dhabi event pass off without any scandals, the event being the latest jewel in the Englishman's crown. Indeed, Ecclestone made much of the fact that he was disappointed the 2009 title fight was settled in Brazil rather than in the desert.