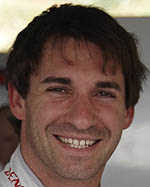 Was Spa as much fun with the 2009-specification car as it was in the past?
Absolutely. Spa is just a great circuit and even though the cars have changed a bit, the circuit is the same and it is still a huge challenge. Every season I look forward particularly to racing at Spa and it is a really nice feeling when practice starts and you can do your first laps. Last weekend was only my third time at Spa in a Formula 1 car but I am sure that feeling never goes away.

Spa is also famous for its changeable weather; were you expecting rain over the weekend?
We knew the most likely day for rain was going to be Friday and that is how it turned out. It was dry at the start of first practice but after a few minutes I saw the spots of rain on my visor and I knew what was coming. It was a typical Spa session really; low clouds and continuous rain. We were quite confident on Friday that it would stay dry for the rest of the weekend so there wasn't a lot to be gained by testing wet-weather set-ups, which meant we lost quite a bit of track time. Still, that was the same for everyone and it's never a surprise to have a rainy session at Spa!

You targeted an improved qualifying performance in Belgium so were you happy with seventh?
My lap in qualifying wasn't bad and I had been consistently in the top 10 through all the sessions, which shows the improvement we made. It was great for the team to see Jarno on the front row and having both cars in the top eight at a time when the competition is so tight is a good sign that we are achieving more performance in qualifying. I would have preferred to be a little higher because I think I had the potential to be in the top six but anyway we were in a promising position.

Were you surprised how competitive Toyota was in qualifying considering the result in Valencia?
We thought Spa should suit us but after Valencia, when we didn't really understand why qualifying was so disappointing; it was difficult to make any predictions. From the start of practice the car felt strong and that gave us confidence because it was clear we were more competitive than in Valencia. Immediately before qualifying we were quite optimistic so it wasn't a big surprise to see Jarno and myself fighting towards the front.

What happened in the race?
My start was okay and as always at Spa the first corner was really tight, with a few cars making contact. I was fighting for the top six at the end of the first sector when things got a bit crazy. Kimi (Raikkonen) went wide and nearly hit Robert (Kubica) when he rejoined, then further back there were two separate accidents. I managed to avoid all the trouble and ended up fourth, but unfortunately the safety car came out.

How did the safety car affect you?
Starting with a relatively light fuel load, a safety car was the last thing we wanted because it prevented me taking advantage of the lighter car and pulling away from the guys behind. As well as that I struggled a bit to warm up the prime tyres so lost a bit of ground at the restart. But I was still in a reasonable position and was expecting to finish in the points.

But you lost time at your first pit stop...
Unfortunately the fuel rig didn't engage properly so the guys had to switch to the back-up. They did a really good job to make the change so quickly but it still cost us a few seconds. That caused me to come out in a bit of traffic, so I lost a little more time and that was basically where we lost the chance for points. I had the potential to finish in the top six because my race pace was pretty good - I set the fifth fastest race lap - but it just didn't happen.

What are your thoughts ahead of the next Grand Prix in Italy?
I am quite encouraged by some aspects of the Belgian Grand Prix weekend, particularly the significant improvement in qualifying pace. We had a bit of bad luck in the race which prevented us from getting a good result but we must be positive and ready to fight back in Monza. It is another high-speed, low-downforce circuit so hopefully we can be strong, although the field is so close at the moment it's not easy to predict what will happen.