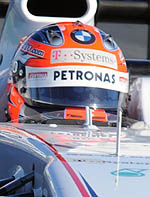 Following the announcement of an emergency press conference in Munich today (10:00), there is intense speculation that BMW is on the verge of announcing its withdrawal from F1.

If true, it would come as major blow to the sport, for, coming seven months after the withdrawal of Honda, it could well signal the departure of two other manufacturers, Toyota and Renault.

Since entering F1 as a manufacturer team in its own right in 2006, BMW has successfully implemented a programme that has seen the German manufacturer set itself a target for each season which it has subsequently gone on to achieve. Until now.

This year, the German team's performance has been abysmal even though it was the first to begin seriously testing under the new regulations and among the first to run KERS, the Munich team championing the controversial system.

While BMW's departure would no doubt delight FIA President Max Mosley, since it would reinforce his continued demands for cost cutting, it would be a major blow to the teams alliance (FOTA) at a time when it was close to signing a new Concorde Agreement with CVC Capital Partners. The agreement, which according to the FIA is due to be signed by the end of this week, would commit all the teams to the sport until the end of 2012.

Announcing the press conference, which will be hosted by the chairman of the BMW board, Dr Norbert Reithofer, the director for development, Dr Klaus Draeger, motorsport director, Mario Theissen, the German manufacturer claims it has been called due to 'current developments in motor sport.' Asked for further details, representatives of the company were unwilling to give them.

While last year BMW finished third in the Constructors' Championship, Robert Kubica at one stage leading the Drivers' Championship, 2009 has been a disaster, its best result being a fifth place for Nick Heidfeld in Malaysia.