Britain to lose its Grand Prix for one year? 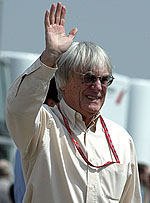 Despite Simon Gillett's continued promises that all is well, and that he and his team are "110 percent committed" and "100 percent certain it will happen" Bernie Ecclestone has admitted that it is entirely possible that Britain will be missing from the 2010 F1 calendar.

However, the F1 supremo insists that this would be for one year only and that providing Gillett remains "110 committed" and ensures "100 percent" that it does happen, Donington will host the 2011 British GP.

After meeting with Gillett, the chief executive of Donington Park Ventures, which has the contract for the race from 2010, Ecclestone admitted that he was prepared to give the circuit an additional twelve months.

"If the work at Donington is not finished in time, we would be happy to skip a year," Ecclestone told The Times.

However, before anyone could propose that Silverstone step into the gap for one more year, the Englishman quickly added: "I don't want to lose the British Grand Prix, that's the last thing we want to do, but we aren't going to Silverstone for sure."

Despite Gillett's continued assurances many remain sceptical about the man and his plan, and the recent revelation that he is being sued by the circuit owners over unpaid rent, not to mention the little matter of problems over planning permission with the local council, have cast further doubt on the situation. There is also concern, as there always has been, as to how Gillet will finance his grand plan for the circuit.

In the meantime, many will also fear that once Britain slips from the calendar it will be gone for a lot longer than one year.